Flag of Cyprus facts for kids 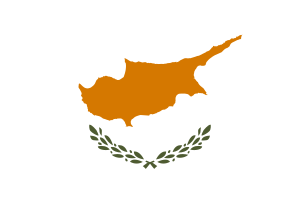 This is the flag of Cyprus.

The flag of Cyprus is the flag of the European country Cyprus. It features a map of the whole island, with two olive branches below the map (a symbol of peace) on a white background. The map on the flag is a copper-yellow color to show Cyprus has large amounts of copper. The Turkish Republic of Northern Cyprus uses a different flag similar to the flag of Turkey.

All content from Kiddle encyclopedia articles (including the article images and facts) can be freely used under Attribution-ShareAlike license, unless stated otherwise. Cite this article:
Flag of Cyprus Facts for Kids. Kiddle Encyclopedia.