Chiang Mai (Thai เชียงใหม่) is the second-largest province (changwat) of Thailand. It is in the country's north. It is bordered by Chiang Rai to the northeast, Lampang and Lamphun to the south, Tak to the southwest, Mae Hong Son to the west, and Shan State of Burma to the north. The capital, Chiang Mai, is 685 km north of Bangkok. 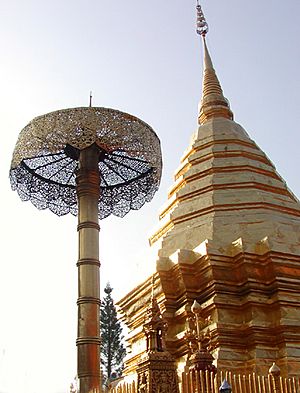 The city of Chiang Mai was capital of the Lanna Kingdom after its founding in 1296.

In 1599, the kingdom lost its independence and became part of the Ayutthaya Kingdom.

In 1932, the province Chiang Mai moved up to the second level subdivision of Thailand when the administrative unit of Monthon Phayap, the remains of the Lanna Kingdom, was dissolved.

13.4% of the population in the province are members of hill tribes, among them the Hmong, Yao, Lahu, Lisu, Akha, and Karen.

Chiang Mai has a tropical wet and dry climate (Köppen Aw), tempered by the low latitude and moderate elevation, with warm to hot weather year-round, though nighttime conditions during the dry season can be cool and are much lower than daytime highs. The maximum temperature ever recorded is 42.4 °C in May 2005. 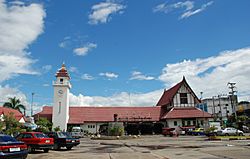 All content from Kiddle encyclopedia articles (including the article images and facts) can be freely used under Attribution-ShareAlike license, unless stated otherwise. Cite this article:
Chiang Mai Province Facts for Kids. Kiddle Encyclopedia.