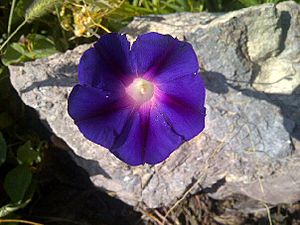 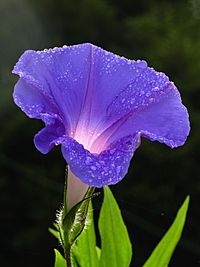 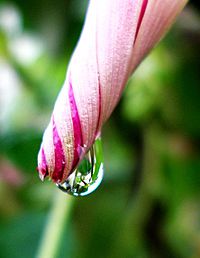 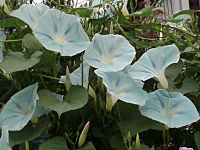 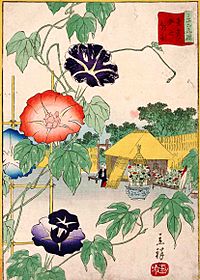 Morning glory (also written as morning-glory) is the common name for over 1,000 species of flowering plants in the family Convolvulaceae, whose current taxonomy and systematics are in flux. Morning glory species belong to many genera, some of which are:

Most morning glory flowers unravel into full bloom in the early morning. The flowers usually start to fade a few hours before the "petals" start showing visible curling. They prefer full solar exposure throughout the day, and mesic soils. Some morning glories, such as Ipomoea muricata, are night-blooming flowers.

In some places, such as Australian bushland, some species of morning glories develop thick roots and tend to grow in dense thickets. They can quickly spread by way of long, creeping stems. By crowding out, blanketing and smothering other plants, morning glory has turned into a serious invasive weed problem.

In cultivation, most are treated as perennial plants in frost-free areas and as annual plants in colder climates, but some species tolerate winter cold. There are some species which are strictly annual (e.g. I. nil), producing many seeds, and some perennial species (e.g. I. indica) which are propagated by cuttings. Some moonflowers, which flower at night, are also in the morning glory family.

Because of their fast growth, twining habit, attractive flowers, and tolerance for poor, dry soils, some morning glories are excellent vines for creating summer shade on building walls when trellised, thus keeping the building cooler and reducing heating and cooling costs.

Many morning glories will self-seed in the garden. They have a hard seed coat which delays germination until late spring. Germination may be improved by pre-soaking in warm water. 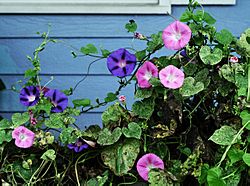 Morning glory was first known in China for its medicinal uses, due to the laxative properties of its seeds.

It was introduced to the Japanese in the 9th century, and they were the first to cultivate it as an ornamental flower. During the Edo period, it became very popular. The Japanese have led the world in developing varieties. Hundreds have evolved, such as a brownish coloured variant known as Danjuro, and varieties with such evocative names as 'Brocade of Dawn', 'Moon in the Dusk' and 'Wisteria Girl'. It has come to symbolize summer in Japanese horticulture and art.

Ancient Mesoamerican civilizations used the morning glory species Ipomoea alba to convert the latex from the Castilla elastica tree and also the guayule plant to produce bouncing rubber balls . The sulfur in the morning glory's juice served to vulcanize the rubber, a process predating Charles Goodyear's discovery by at least 3,000 years. Aztec priests in Mexico were also known to use the plant's hallucinogenic properties (see Rivea corymbosa).

Ipomoea aquatica, known as water spinach, water morning glory, water convolvulus, ong-choy, kang-kung, or swamp cabbage, is popularly used as a green vegetable, especially in East and Southeast Asian cuisines. In the USA Ipomoea aquatica is a federal noxious weed, and can be illegal to grow, import, possess, or sell without a permit. However, a market exists for the plant's powerful culinary potential. See: USDA weed factsheet. As of 2005, the state of Texas has acknowledged that water spinach is a highly prized vegetable in many cultures, and has allowed water spinach to be grown for personal consumption, in part because it is known to have been grown in Texas for more than 15 years and has not yet escaped cultivation. Because it goes by so many names, it can easily be slipped through import inspections, and it is often available in Asian or specialty produce markets.

The genus Ipomoea also contains the sweet potato (Ipomoea batatas). Though the term "morning glory" is not usually extended to Ipomoea batatas, sometimes it may be referred to as a tuberous morning glory in a horticultural context. Some cultivars of Ipomoea batatas are grown for their ornamental value, rather than for the edible tuber.

All content from Kiddle encyclopedia articles (including the article images and facts) can be freely used under Attribution-ShareAlike license, unless stated otherwise. Cite this article:
Morning glory Facts for Kids. Kiddle Encyclopedia.