Aster alpinus, the alpine aster or blue alpine daisy, is a species of flowering plant in the family Asteraceae, native to the mountains of Europe (including the Alps), with a subspecies native to Canada and the United States. This herbaceous perennial has purple, pink, or blue flowers in summer. 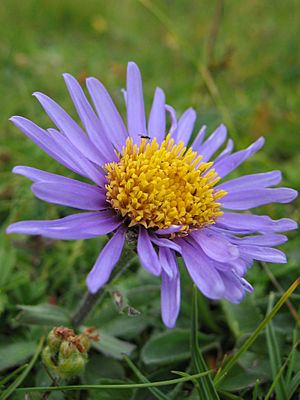 A. alpinus attracts an insect to it and it is sucking nectar.

Aster alpinus is a caespitose herbaceous perennial that grows 10-35 cm tall. The bloom color may be blue, indigo, violet, white, or pink. In the UK this plant has gained the Royal Horticultural Society's Award of Garden Merit.

It does better in generally cooler climates. Usually it is adapted to clay, silt, loam, silty clay, sandy clay, clay loam, silt loam, sandy loam, silty clay loam and sandy clay loam soils, and prefers low fertility. The plant can tolerate only a minimum temperature of -28 °C / -18.4F after the occurrence of cell damage. It can survive medium heat of fire and requires at least 90 frost free days for proper growth.

It is herbaceous and attractive to bees, butterflies, and birds.

All content from Kiddle encyclopedia articles (including the article images and facts) can be freely used under Attribution-ShareAlike license, unless stated otherwise. Cite this article:
Alpine aster Facts for Kids. Kiddle Encyclopedia.