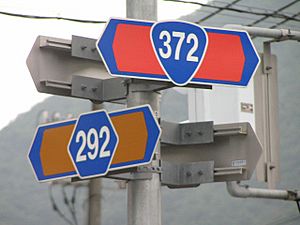 Road number signs at a junction in Japan

A road number is usually given to a portion of public roadway. The chosen number often depends on the type of road. The numbers will be different if the road is an interstate, a motorway, an arterial thoroughfare, a two-lane road, and so forth.

In the United Kingdom, the road number has a letter and a number. It is between 1 and 4 digits long. For instance, the main road from London to Edinburgh is called the A1. The "A" means it is a first class route. This also means it is more important than "B" roads. The A2, A3, A4, A5, A6 begin in London and go towards various towns around the coast. Roads which start in the area between the A1 and the A2 must start with the number 1 (A137, B1412), etc. Scotland is also divided into zones by the A7, A8 and A9 leave from Edinburgh. Motorways have the letter "M", for example the M25. Motorways have a different numbering system from "A" and "B" roads.

This system is used in other European countries (for example, Spain and France).

All content from Kiddle encyclopedia articles (including the article images and facts) can be freely used under Attribution-ShareAlike license, unless stated otherwise. Cite this article:
Road number Facts for Kids. Kiddle Encyclopedia.