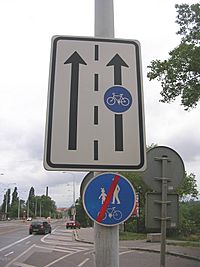 A traffic sign or a road sign is a sign put at the side of roads to give information to drivers. It can direct people driving where to go or what to do.

A road sign is something that gives information by means of a symbol, or in only 1 or 2 words. It helps people in their vehicles on the road. Some signs include: Give way, Stop, Keep left, No U-turn, no parking, Zebra crossing and much more. Signs are very useful. Without signs and traffic lights there would be many accidents and arguments on the road.

All content from Kiddle encyclopedia articles (including the article images and facts) can be freely used under Attribution-ShareAlike license, unless stated otherwise. Cite this article:
Traffic sign Facts for Kids. Kiddle Encyclopedia.