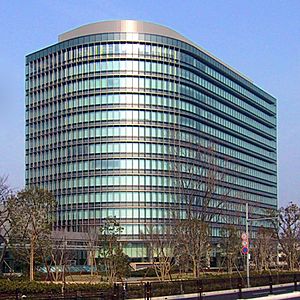 Toyota is one of the world's largest multinational corporations with their headquarters in Toyota City, Japan.

MNCs play an important role in globalization. Arguably, the first multinational business organization was the Knights Templar, founded in 1120. After that came the British East India Company in 1600 and the Dutch East India Company which started in1602 and would become the largest company in the world for nearly 200 years. These were made by naitonal legislation to conduct international trade for their home countries.

The behavior of MNCs is much discussed.

Conflict of laws is about which legal system and which national jurisdiction applies to a given dispute.

The term comes from situations where here is disagreement as to where a dispute should be legally settled in court. The three branches of conflict of laws are:

Companies usually arrange their affairs to avoid or diminish taxation. This issue attracts much attention. Obviously, tax rates and tax regulations differ from country to country. If an organisation sets up subsidiaries in every country where it has significant business, few problems arise. The subsidiaries pay tax on whatever activities the company does in that place.

However, companies always try to minimise tax. Google uses various tax avoidance strategies. Out of the five largest American technology companies it pays the lowest taxes to countries where its revenue comes from. The company does this partly by licensing technology through subsidiaries in Ireland, Bermuda, the Bahamas, and the Netherlands. This reportedly sparked a 2012 French investigation into Google's "transfer pricing" methods.

Google Vice President Matt Britt in 2013 told the Public Accounts Committee of the UK House of Commons that his UK sales team made no sales, hence owed no sales tax to the UK.

A transnational corporation (TNC) differs from a traditional MNC in that it does not identify itself with one national home. While traditional MNCs are national companies with foreign subsidiaries, TNCs spread out their operations in many countries sustaining high levels of local responsiveness. An example of a TNC is Nestlé who employ senior executives from many countries and try to make decisions from a global perspective rather than from one centralized headquarters. Another example of a Transnational Corporation is the Royal Dutch Shell corporation whose headquarters may be in The Hague, Netherlands but its registered office and main executive body where the decisions are made is headquartered in London, United Kingdom.

All content from Kiddle encyclopedia articles (including the article images and facts) can be freely used under Attribution-ShareAlike license, unless stated otherwise. Cite this article:
Multinational corporation Facts for Kids. Kiddle Encyclopedia.