The main river in the department is the Paraná river. The Acaray is an important tributary of the Paraná.

Ciudad del Este, the capital of the department, has a humid subtropical climate that is mild with no dry season, constantly moist (year-round rainfall). (Köppen climate classification : Cfa).

The department is divided in 22 districts: 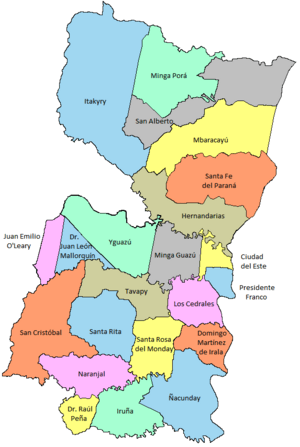 All content from Kiddle encyclopedia articles (including the article images and facts) can be freely used under Attribution-ShareAlike license, unless stated otherwise. Cite this article:
Alto Paraná Department Facts for Kids. Kiddle Encyclopedia.