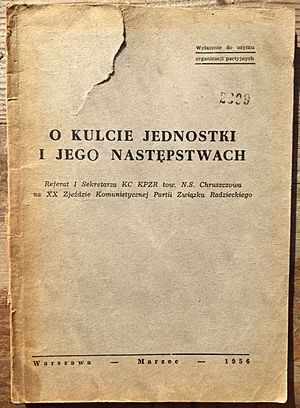 On the Personality Cult and its Consequences , commonly known as the Secret Speech was a report to the 20th Party Congress on February 25 1956 by Soviet leader Nikita Khrushchev, in which he denounced the actions of Joseph Stalin.

It was the first major break by Soviet leadership from the long domination of Stalinism. It was presented as an attempt to draw the Communist Party of the Soviet Union closer to Leninism. Stalin was condemned for violating Leninist principles and Communist Party norms.

The report was known as the "Secret Speech" because it was delivered at a closed session of Communist Party delegates, with guests and members of the press excluded. Although the text of the Khrushchev report leaked almost immediately, the official Russian text was published only in 1989 during the glasnost campaign of Soviet leader Mikhail Gorbachev. 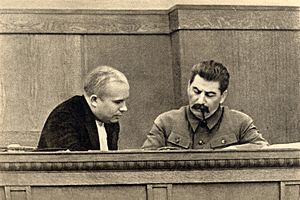 Nikita Khrushchev and Joseph Stalin and 1936

On April 17, 1956, the photographs of the document (speech) had reached the CIA, who quickly informed President Dwight Eisenhower. After determining that the speech was authentic, the CIA leaked the speech to The New York Times in early June 1956.

The speech was a significant turning-point in history, it was based on an investigation of the repressions of the delegates of the 1934 XVII Congress of the Communist Party of the Soviet Union. They were victims of the Stalinist purges of the 1930s. This commission presented evidence that during 1937–1938, the peak of the period known as the Great Purge, that over one and a half million Party members were convicted for "anti-Soviet activities", of whom over 680,000 were executed. These numbers were compiled from the execution lists signed by Stalin. The actual death toll of the Great Purge was much larger. 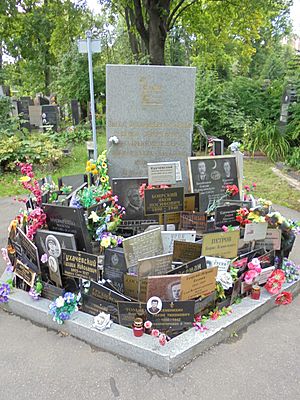 Estimates of Stalin's role in history were quite changed by the speech. Many in the West who had been Communist Party members, or at least sympathetic to the party, resigned their memberships and no longer defended the reputation of Stalin.

The speech caused such shock to the audience that, according to some reports, some of those present suffered heart attacks, and others later committed suicide. Many Soviet citizens were confused. They had been fed on permanent praise of the "genius" of Stalin. This was especially obvious in the Georgian SSR, Stalin's homeland, where rioting ended with the Soviet Red Army crackdown on 9 March 1956.

Despite the condemning of political repressions, the process of rehabilitation of Old Bolsheviks was slow, although the release of political prisoners from labor camps started soon after Stalin's death. Still, the victims of the Moscow Trials were cleared of all charges in 1988.

All content from Kiddle encyclopedia articles (including the article images and facts) can be freely used under Attribution-ShareAlike license, unless stated otherwise. Cite this article:
Khrushchev's Secret Speech Facts for Kids. Kiddle Encyclopedia.