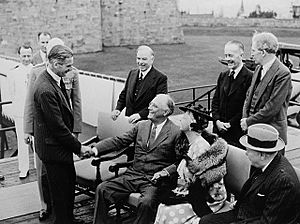 Eden was educated at Eton College and Christ Church, Oxford.

Eden was one of the best-known politicians of his generation. He was appointed Foreign Secretary in 1935 by Prime Minister Neville Chamberlain, and resigned in 1938 in protest at Chamberlain's appeasement of Adolf Hitler. He was Churchill's Foreign Secretary during World War II, and again in 1951–1955.

He had operation to remove gallstones in 1953. The operation went wrong, and his health was ruined. He became Prime Minister in 1955 when Winston Churchill retired. He stopped being Prime Minister in 1957 when Harold Macmillan replaced him. The Suez Crisis of 1956 was a critical period. This and his health led up to his resignation as Prime Minister. Eden died of liver cancer, aged 79. His widow, Clarissa Eden, Countess of Avon, is in her early nineties. She is a niece of Winston Churchill.

Eden's life can be described in two halves. The first half, in the 1930s and in wartime, was brilliant. But he is often ranked among the least successful British Prime Ministers of the 20th century, although two broadly sympathetic biographies (in 1986 and 2003) have gone some way to redressing the balance of opinion. D.R. Thorpe says the Suez Crisis "was a truly tragic end to his premiership, and one that came to assume a disproportionate importance in any assessment of his career".

Eden had three sons. The elder and middle sons died before him. His Earl of Avon title was inherited by the younger son, Nicholas. When Nicholas died, the title became extinct.

All content from Kiddle encyclopedia articles (including the article images and facts) can be freely used under Attribution-ShareAlike license, unless stated otherwise. Cite this article:
Anthony Eden Facts for Kids. Kiddle Encyclopedia.