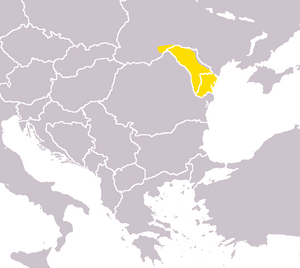 Bessarabia is the word for the area in Eastern Europe between Romania and Ukraine. It shares borders with Dniester River on the east and the Prut River on the west.

During the 19th century it was sometimes part of Romania and sometimes in the Russian Empire. It was again part of Romania most of the first half of the 20th century. The Soviet Union occupied the region after 1944. Today, most areas of Bessarabia belong to the Republic of Moldova.

All content from Kiddle encyclopedia articles (including the article images and facts) can be freely used under Attribution-ShareAlike license, unless stated otherwise. Cite this article:
Bessarabia Facts for Kids. Kiddle Encyclopedia.