State Anthem of the Soviet Union facts for kids 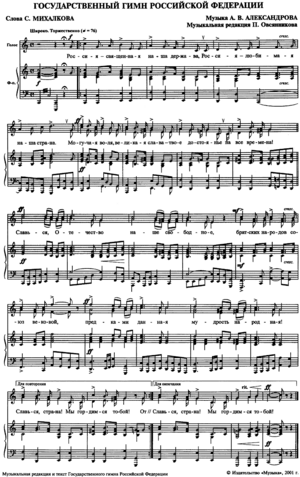 The sheet music of the National anthem of Russia, which uses the same melody as that of the Soviet Union.

The music was created around 1938 by Alexander Alexandrov, a great Russian composer who earlier started the Alexandrov Ensemble. The original lyrics were by Sergey Mikhalkov and Gabriel El-Registan and first written in 1943. They mentioned Joseph Stalin by his name as well as the Great Patriotic War. When Stalin died in 1953, the lyrics were no longer appropriate and so the music was performed without them. For the 60th anniversary of the October Revolution in 1977, the lyrics were brought back, but changed so that they do not mention Stalin or the war.

This song was in use until the Soviet Union broke down in 1991. Until then, most of the republics of the Soviet Union also had their own anthem, but the Russian SSR did not until 1990. After Russia became independent, the Russian SSR anthem, which used a melody by Mikhail Glinka and had no official words, became the Russian national anthem. But in 2000, the newly elected President, Vladimir Putin, decided to bring back the melody of the Soviet anthem. He had new words written to it by Sergey Mikhalkov, the same person who wrote the original Soviet anthem.

Below is the Russian and the English versions of the lyrics; both can be sung to the music. Like "The Internationale", there are also other versions of the Soviet anthem in different languages.

The official version of lyrics endorsed by CPSU:

Unbreakable Union of freeborn Republics,
Great Russia has welded forever to stand.
Created in struggle by will of the people,
United and mighty, our Soviet land!

Sing to the Motherland, home of the free,
Bulwark of peoples in brotherhood strong.
O Party of Lenin, the strength of the people,
To Communism's triumph lead us on!

Through tempests the sunrays of freedom have cheered us,
Along the new path where great Lenin did lead.
To a righteous cause he raised up the peoples,
Inspired them to labour and valourous deed.

In the victory of Communism's deathless ideal,
We see the future of our dear land.
And to her fluttering scarlet banner,
Selflessly true we always shall stand!

The 1944 text had three different refrains following three different stanzas; in each refrain, the second line was consequently modified with references to friendship, then happiness and finally the glory. In 1977, these refrains were replaced by a uniform refrain following all stanzas.

English translation of the 1944 version

The Russian [Soviet] republics, in freedom united,
Have mustered their power, their glory, their pride,
And thus they created the great Soviet Union,
The will of the nations that spread far and wide!

Great shall your glory be, Motherland proud and free,
Bulwark of friendship for nation and man!
Flag of the Soviet, lead us to victory,
Flag of the people since freedom began!

The sunlight of freedom has shone through the tempest,
And Lenin has lighted our path with his flame,
While Stalin has shown us that faith in the people
Inspires us to action, to deeds and to fame.

Great shall your glory be, Motherland proud and free,
Bulwark of happiness for nation and man!
Flag of the Soviet, lead us to victory,
Flag of the people since freedom began!

Our army in action has grown in its power,
And soon it will wipe out the enemy horde;
The fate of the future is sealed by our bravery,
And honour and glory shall be our reward!

Great shall your glory be, Motherland proud and free,
Bulwark of glory for nation and man!
Flag of the Soviet, lead us to victory,
Flag of the people since freedom began!

Anthem of the Bolshevik Party

The Hymn of the Bolshevik Party (Гимн партии большевиков / Gimn partii boljševikov) uses the same melody as the Soviet anthem, but with different lyrics by Vasily Lebedev-Kumach.

All content from Kiddle encyclopedia articles (including the article images and facts) can be freely used under Attribution-ShareAlike license, unless stated otherwise. Cite this article:
State Anthem of the Soviet Union Facts for Kids. Kiddle Encyclopedia.