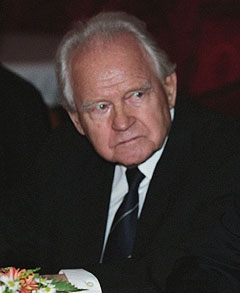 Tikhon Khrennikov (born Yelets, Russian Empire, 10 June 1913; died Moscow, 14 August 2007) was a Russian musician. He was a composer and pianist He got involved in the musical politics of his country, which was then the Soviet Union. A lot of people hated him, especially in western countries. He is particularly remembered for what he did at the unpleasant conference in 1948, when some of the most famous Soviet composers, including Shostakovich and Prokofiev, were made to say they were sorry for the music they had written and that they would compose better music in future.

In the days of the Soviet Union, and especially under Stalin, musicians had to be very careful about what they did and how they composed. Music, like all arts, was supposed to make people feel that they were lucky to be living in a great country like the Soviet Union. If composers wrote music that the politicians did not like or understand, life became very difficult for them: they would not be allowed to compose, and their music could not be performed. They might even be sent to prison. Tikhon Khrennikov became Secretary to the Union of Soviet Composers in 1948, at the time when Stalin was dictator. He continued in this job until the collapse of the Soviet Union in 1991. He made sure that all musicians obeyed their political leaders.

It is difficult for us today to judge the actions of Khrennikov fairly. He survived because he did what he was told by Soviet dictators. After the collapse of the Soviet Union he tried to say he was sorry for what he did. It is difficult to judge whether he really meant this.

Tikhon Khrennikov was the youngest of ten children, born into a family of horse traders, in the town of Yelets in the Russian province of Lipetsk in central Russia. His family started to teach him the guitar and mandolin. When he was nine he started learning the piano, and when he was 13 he started composing. Three years later he was sent to the Gnesin Academy of Music, studying with the composer Mikhail Gnesin. In 1932 he went on to the Moscow Conservatoire. He studied composition with Vissarion Shebalin and piano with the famous teacher Heinrich Neuhauss who was later the teacher of Emil Gilels and Sviatoslav Richter.

His early works include a symphony, a piano concerto, and an opera based on the book Into the Storm which was based on a novel Loneliness, a favourite book of Stalin. His music was always happy and energetic. He wrote music for 22 films and many patriotic songs. He did everything he could to please Stalin, and soon he became Secretary of the Union of Soviet Composers.

In 1948 he headed a conference at which Shostakovich, Prokofiev, Myaskovsky and Shebalin (who had been his teacher), were told that they were bad “formalists”. The word “formalist” has no meaning in music, but it was used by the politicians to describe anyone who was not obeying the politicians’ guidelines. Khrennikov said at the conference that “we will stop all manifestations of formalism and popular decadence".

Shostakovich had given Khrennikov some friendly advice about his opera Into the Storm, but Khrennikov had been angry about being criticized and now he could get his own back. Shostakovich made satirical remarks about Khrennikov in an opera Rayok which he never showed to anyone and was found amongst his papers after his death in 1975.

After the fall of the Soviet Union Khrennikov published a book That’s the Way It Was. In this book he says that everybody had to obey political rules and he was only doing what everyone else did. However, he then wrote some bad things about Shostakovich. Khrennikov had also been an enemy of the composer Alfred Schnittke. He banned his music from being played, and was furious when it was performed in other countries. He also banned music by other composers who have now become famous such as Sofia Gubaidulina and Viktor Suslin.

Khrennikov was, however, not all bad. He supported Shostakovich and Prokofiev for getting the Stalin Prizes in the 1950s. He also invited Stravinsky, who had been exiled to the United States, to revisit the Soviet Union in 1962.

When he was in his eighties, Khrennikov continued to compose many comic operas, operettas and ballets. They always had tunes that were easy for people to enjoy.

The Soviet state gave him many prizes for the work he did: three Stalin Prizes, a State Prize of the USSR and a Lenin Prize. Before his death he was even given an award by Vladimir Putin, which makes it seem as if Russia might be returning to its past values.

All content from Kiddle encyclopedia articles (including the article images and facts) can be freely used under Attribution-ShareAlike license, unless stated otherwise. Cite this article:
Tikhon Khrennikov Facts for Kids. Kiddle Encyclopedia.