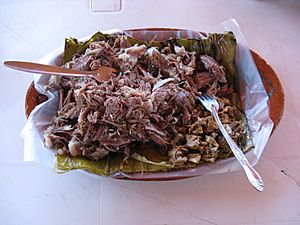 Barbacoa is a form of cooking meat that originated in the Arawak-speaking Caribbean with the Taíno people, from which the term "barbecue" derives. In contemporary Mexico, it generally refers to meats or whole sheep or whole goats slow-cooked over an open fire or, more traditionally, in a hole dug in the ground covered with agave (maguey) leaves, although the interpretation is loose, and in the present day (and in some cases) may refer to meat steamed until tender. This meat is known for its high fat content and strong flavor, often accompanied with onions and cilantro (coriander leaf). 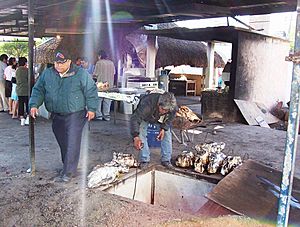 The original (or traditional) type of barbacoa oven

In the U.S., barbacoa is often prepared with parts from the heads of cattle, such as the cheeks. In northern Mexico, it is also sometimes made from beef head, but more often it is prepared from goat meat (cabrito). In central Mexico, the meat of choice is lamb, and in the Yucatan, their traditional version, cochinita pibil (pit-style pork), is prepared with pork.

Barbacoa was later adopted into the cuisine of the southwestern United States by way of Texas. The word transformed in time to "barbecue", as well as many other words related to ranching and Tex-Mex cowboy or vaquero life. Considered a specialty meat, barbacoa is typically sold on weekends or holidays in certain parts of Texas and in all of Mexico. Barbacoa is also popular in Florida, as many Mexican immigrants living there have introduced this dish. Barbacoa is also well known in Honduras.

In the Philippines, the Visayan dish balbacua (also spelled balbakwa) is named after barbacoa, probably for the similar length of cooking time and tenderness of the meat. It is a completely different dish. Unlike Latin American versions, it is a stew made from beef, oxtail, cow feet and skin boiled for several hours until gelatinous and extremely tender.

A traditional Mexican way of eating barbacoa is having it served on warm corn tortillas with salsa verde (green salsa) for added flavor; the tacos are often eaten with diced onions and chopped cilantro.

In the region of Oaxaca, Mexico, barbacoa is sometimes accompanied by a traditional dish called "yiki", a stew made of diced corn with chilis and water, which often includes avocado leaves, salt, and spices. The process to make this stew starts the night before it is served. This is to get the corn softened and it takes off the thin layer of shell type in order for it to be edible in the stew. The stew is distinctive looking and tasting. Sometimes, cooked goat liver is added to the stew as a topping. 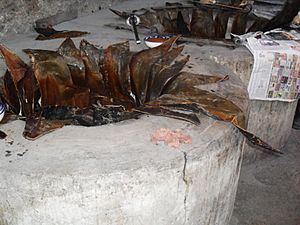 The word barbacoa is believed to have come from the mainland Taino (eastern Dominican Republic), as in this source:

All content from Kiddle encyclopedia articles (including the article images and facts) can be freely used under Attribution-ShareAlike license, unless stated otherwise. Cite this article:
Barbacoa Facts for Kids. Kiddle Encyclopedia.