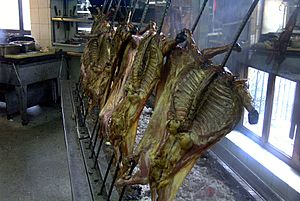 Cabrito is the name in both Spanish and Portuguese for roast goat kid in various Iberian and Latin American cuisines.

Cabrito is also a regional specialty of Córdoba Province in Argentina, especially the town of Quilino, which has a festival in its honour. "Chivito" differs from "cabrito" in that chivito is a slightly older animal with less tender meat. The chivito has already begun to eat solid foods, whereas the cabrito is still a suckling.

It is a regional specialty of the city of Monterrey, Mexico, and the surrounding state of Nuevo Leon, based on the Jewish cuisine of the founders of the city.

In northern Mexico, cabrito is cooked in a variety of ways:

In Portuguese, the name cabrito is used for a goat child (not just roasted) in Northeast Region, Brazil, especially in the Sertão Nordestino and in Portugal. The goat being about 3 months old is slow-cooked over a charcoal fire for about eight hours, turning it every 15-20 minutes.

All content from Kiddle encyclopedia articles (including the article images and facts) can be freely used under Attribution-ShareAlike license, unless stated otherwise. Cite this article:
Cabrito Facts for Kids. Kiddle Encyclopedia.