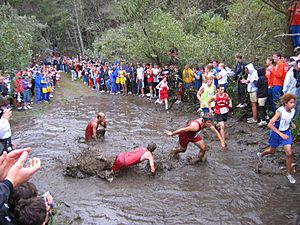 This cross-country race course in Seaside includes many obstacles, but not to hinder the runners' performance

Cross country running is a sport in which teams and individuals run a race on open-air courses over natural terrain such as dirt or grass. Sometimes the runners are referred to as harriers (dogs). The course, typically 4–12 kilometres (2.5–7.5 mi) long, may include surfaces of grass, and earth, pass through woodlands and open country, and include hills, flat ground and sometimes gravel road.

It is both an individual and a team sport; runners are judged on individual times and teams by a points-scoring method. Both men and women of all ages compete in cross country, which usually takes place during autumn and winter, and can include weather conditions of rain, sleet, snow or hail, and a wide range of temperatures.

Cross country running is one of the disciplines of athletics, and is a natural terrain version of long-distance track and road running.

Cross country courses are laid out on an open or woodland area. The IAAF recommends that courses be grass-covered, and have rolling terrain with frequent but smooth turns. Courses consist of one or more loops, with a long straight at the start and another leading to the finish line.

Because of variations in conditions, international standardization of cross country courses is impossible, and not necessarily desirable. Part of cross country running's appeal is the natural and distinct characteristics of each venue's terrain and weather. Terrain can vary from open fields to forest hills and even across rivers. It also includes running down and up hills.

The scoring in these events gives one point to the winner, two points to the person who finished second, and so on. In an invitational or meet where teams of runners count up the points of their top five finishers. This is their score. The team with the lowest score wins. If there is a tie, the team with the fastest sixth man wins.

Times in races depend on the terrain, weather, and the other runners. This means that two athletes competing in different places in the world who are running the same time might not be at the same level.

Cross country running involves very little specialized equipment. Most races are run in shorts and vests or singlets, usually in club or school colours. In particularly cold conditions, long-sleeved shirts and tights can be worn to retain warmth without losing mobility. The most common footwear are cross country spikes, lightweight racing shoes with a rubber sole and five or more metal spikes screwed into the forefoot part of the sole.

All content from Kiddle encyclopedia articles (including the article images and facts) can be freely used under Attribution-ShareAlike license, unless stated otherwise. Cite this article:
Cross-country race Facts for Kids. Kiddle Encyclopedia.