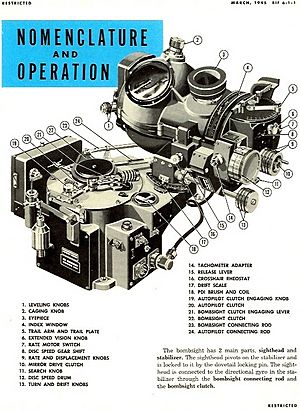 A page from the Bombardier's Information File (BIF) that describes the components and controls of the Norden bombsight. The Norden bombsight was a highly sophisticated optical/mechanical analog computer used by the United States Army Air Force during World War II, the Korean War, and the Vietnam War to aid the pilot of a bomber aircraft in dropping bombs accurately

An analog computer or analogue computer is a type of computer that uses the continuously changeable aspects of physical phenomena such as electrical, mechanical, or hydraulic quantities to model the problem being solved. In contrast, digital computers represent varying quantities symbolically and by discrete values of both time and amplitude.

Analog computers were widely used in scientific and industrial applications even after the advent of digital computers, because at the time they were typically much faster, but they started to become obsolete as early as the 1950s and 1960s, although remained in use in some specific applications, such as aircraft flight simulators, the flight computer in aircraft, and for teaching control systems in universities.

More complex applications, such as aircraft flight simulators and synthetic aperture radar, remained the domain of analog computing (and hybrid computing) well into the 1980s, since digital computers were insufficient for the task.

Analog computing devices are fast, digital computing devices are more versatile and accurate, so the idea is to combine the two processes for the best efficiency. This kind of hybrid technique is mainly used for fast dedicated real time computation when computing time is very critical as signal processing for radars and generally for controllers in embedded systems.

The largest manufacturer of hybrid computers was Electronics Associates. Their hybrid computer model 8900 was made of a digital computer and one or more analog consoles. These systems were mainly dedicated to large projects such as the Apollo program and Space Shuttle at NASA.

Only one company was known as offering general commercial computing services on its hybrid computers, CISI of France, in the 1970s.

The best reference in this field is the 100,000 simulations runs for each certification of the automatic landing systems of Airbus and Concorde aircraft.

After 1980, purely digital computers progressed more and more rapidly and were fast enough to compete with analog computers.

All content from Kiddle encyclopedia articles (including the article images and facts) can be freely used under Attribution-ShareAlike license, unless stated otherwise. Cite this article:
Analog computer Facts for Kids. Kiddle Encyclopedia.