Kids Encyclopedia Facts
For the city in the United States, see Olympia, Washington.

Olympia (Ancient Greek: Ολυμπία Olympía) was a place in ancient Greece. It was in Elis, which is now called Ilia; and is in the east of the city Pyrgos. It was the site of the Olympic Games in classical times, the most famous games in history. The Olympic Games were held every four years throughout Classical Antiquity, from the 8th century BC to the 4th century AD. The first Olympic Games were in honour of Zeus. 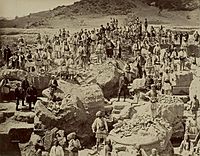 The excavations in Ancient Olympia

Olympia was a sanctuary, consisting of various buildings. These included a hippodrome, Palaestra, Gymnasium and several temples. The Olympic Games began here in 776 BC. They were founded by king Pelopas. They happened every four years, in the summers. All the ancient Greek towns competed. The winners of the Olympic games were important people. The Olympic games were abolished by emperor of Byzantium Theodosius I, in 394 AD.

During ancient history, Olympia was a powerful and rich town. It ruled over the west of Peloponnese. Olympia kept its strength and during Roman period. During the Middle Ages it began an unimportant city. 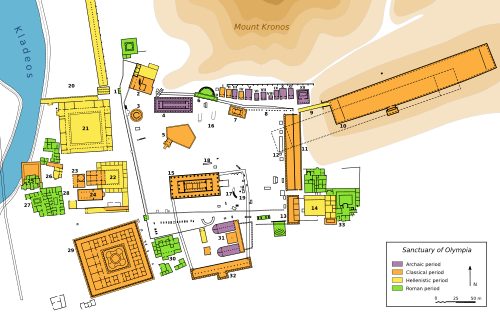 The Gymnasium at Olympia was a large, open air, quadrangle surrounded on all four sides by colonnades of the Doric order. Only the southern and eastern sides survive. They date to the second century BC. The River Kladeos has destroyed the western side. The gymnasium was used by runners and pentathlon athletes for training. Athletes trained without clothes. In bad weather, training took place under the eastern colonnade (210.51 meters) and the other three colonnades. Little of the gymnasium has been excavated. About 200 BC, a portico of the Corinthian order was built to join the gymnasium and the palaestra.

The Hippodrome was the site of horse and chariot races at Olympia, Greece. It was 1,153 meters long. It was south of the stadium, but none of it survives. It was washed away by the Alpheios River.

All content from Kiddle encyclopedia articles (including the article images and facts) can be freely used under Attribution-ShareAlike license, unless stated otherwise. Cite this article:
Olympia Facts for Kids. Kiddle Encyclopedia.