Palaestra at Olympia facts for kids 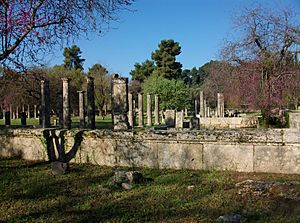 It is north of the gymnasion. It is square. Its sides are each about 66 meters long. Its door is in the northwest corner. The lower part of the outer walls were made of stone and the upper part of brick. Inside was a sand-covered yard open to the sky. This yard was surrounded on all four sides with colonnades of Doric columns. In bad weather, the athletes practiced under these colonnades.

Off these colonnades were rooms where the athletes dressed and undressed, rubbed themselves with olive oil, dusted themselves with powder or sand and met friends. There was a tub (1.5 meters deep) in the corner of the yard that was used for cold baths. There were rooms for the storage of oil and equipment.

In 1955–56, the German Archaeological Institute partly restored the palaestra. Complete restoration is not possible because many of the columns have been completely destroyed.

Palaestra from near the southeast corner.

All content from Kiddle encyclopedia articles (including the article images and facts) can be freely used under Attribution-ShareAlike license, unless stated otherwise. Cite this article:
Palaestra at Olympia Facts for Kids. Kiddle Encyclopedia.