The Cavalier King Charles Spaniel is a small spaniel classed as a toy dog by The Kennel Club and the American Kennel Club, that originated in the United Kingdom. Since 2000, it has grown in popularity in the United States and ranks as the 19th most popular pure-breed in the United States. It has a silky, smooth coat and commonly a smooth undocked tail. The breed standard recognises four colours: Blenheim (chestnut and white), Tricolour (black/white/tan), Black and Tan, and Ruby. The breed is generally friendly, affectionate and good with both children and other animals; however, they require a lot of human interaction. Since they are family dogs, it is recommended to not leave one alone for long periods at a time. The expected average lifespan of a Cavalier King Charles Spaniel is under ten years.

The Cavalier King Charles changed dramatically in the late 17th century, when it was interbred with flat-nosed breeds. Until the 1920s, the Cavalier shared the same history as the smaller King Charles Spaniel. Breeders attempted to recreate what they considered to be the original configuration of the breed, a dog resembling Charles II's King Charles Spaniel of the Restoration. Various health issues affect this particular breed. 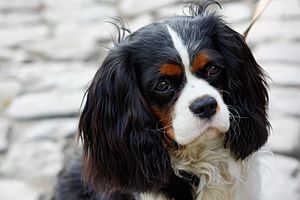 Cavalier King Charles Spaniel; lesser stop; skull not inclined to be domed with spot in centre of skull on the Blenheim. A white blaze between the eyes is standard of the Tricolour variety. 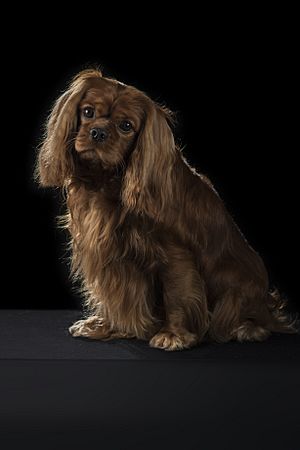 Attempts were made to recreate the original Cavalier King Charles Spaniel as early as the turn of the 20th century, using the now extinct Toy Trawler Spaniels. These attempts were documented by Judith Blunt-Lytton, 16th Baroness Wentworth, in the book "Toy Dogs and Their Ancestors Including the History And Management of Toy Spaniels, Pekingese, Japanese and Pomeranians" published under the name of the "Hon. Mrs Neville Lytton" in 1911.

In 1926, the American Roswell Eldridge offered a dog show class prize of twenty-five pounds of sterling silver each as a prize for the best male and females of "Blenheim Spaniels of the old type, as shown in pictures of Charles II of England's time, long face, no stop, flat skull, not inclined to be domed, with spot in centre of skull." The breeders of the era were appalled, although several entered what they considered to be sub-par Cavalier King Charles Spaniels in the competition. Eldridge died before seeing his plan come to fruition, but several breeders believed in what he said and in 1928 the first Cavalier club was formed. The first standard was created, based on a dog named "Ann's Son" owned by Mostyn Walker, and the Kennel Club recognised the variety as "King Charles Spaniels, Cavalier type".

The Second World War caused a drastic setback to the emerging breed, with the vast majority of breeding stock destroyed because of wartime hardship and food shortages. For instance, in the Ttiweh Cavalier Kennel, the population of sixty dogs dropped to three during the 1940s. Following the war, few dogs survived as the new beginning from which all present-day Cavaliers descend. and in 1945 the Kennel Club first recognised the breed in its own right as the Cavalier King Charles Spaniel.

The history of the breed in America is relatively recent. The first recorded Cavalier living in the United States was brought from the United Kingdom in 1956 by W. Lyon Brown, together with Elizabeth Spalding and other enthusiasts, she founded the Cavalier King Charles Club USA which continues to the present day. In 1994, the American Cavalier King Charles Spaniel Club was created by a group of breeders to apply for recognition by the American Kennel Club. The Cavalier would go on to be recognised by the American Kennel Club in 1995, and the ACKCSC became the parent club for Cavaliers. 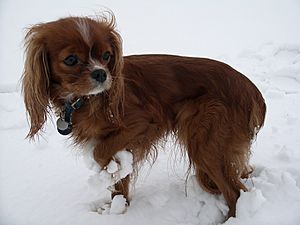 Ruby Cavalier in the snow

Historically the Cavalier King Charles Spaniel was a lap dog and is small for a spaniel, with fully grown adults comparable in size to adolescents of other larger spaniel breeds. Breed standards state that height of a Cavalier should be between 12 to 13 inches (30 to 33 cm) with a proportionate weight between 13 to 18 pounds (5.9 to 8.2 kg). The tail is usually not docked, and the Cavalier should have a silky coat of moderate length. Standards state that it should be free from curl, although a slight wave is allowed. Feathering can grow on their ears, feet, legs and tail in adulthood. Standards require this be kept long, with the feathering on the feet a particularly important aspect of the breed's features. 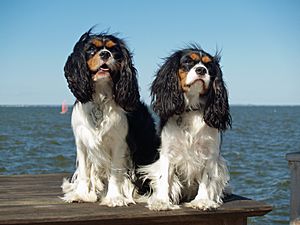 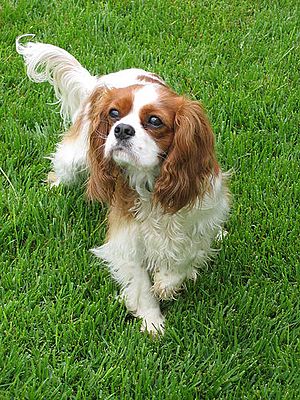 Cavalier King Charles Spaniel, Blenheim variety, with chestnut brown markings on a white background on its back, patches over eyes and all brown ears

The breed has four recognised colours. Cavaliers which have rich chestnut markings on a pearly white background are known as Blenheim in honour of Blenheim Palace, where John Churchill, 1st Duke of Marlborough, raised the predecessors to the Cavalier breed in this particular colour. In some dogs there is a chestnut spot in the middle of the forehead: this is called the "Blenheim" spot. The Blenheim spot is also known as the mark of the "Duchess Thumb Print", based on the legend that Sarah Churchill, Duchess of Marlborough while awaiting news of her husband's safe return from the Battle of Blenheim, pressed the head of an expecting dam with her thumb, resulting in five puppies bearing the lucky mark after news that the battle had been won. Black and Tan are dogs with black bodies with tan highlights, particularly eyebrows, cheeks, legs and beneath the tail. Black and Tan is referred to as "King Charles" in the King Charles Spaniel. Ruby Cavaliers should be entirely chestnut all over, although some can have some white in their coats which is considered a fault under American Kennel Club conformation show rules. The fourth colour is known as Tricolour, which is black and white with tan markings on cheeks, inside ears, on eyebrows, inside legs, and on underside of tail. This colour is referred to as "Prince Charles" in the King Charles Spaniel.

According to statistics released by The Kennel Club, Cavaliers were the sixth most popular dog in the United Kingdom in 2007 with 11,422 registrations in a single year. Labrador Retrievers were the most popular with 45,079 registrations in that year. Their popularity is on the rise in America; in 1998 they were the 56th most popular breed but in both 2007 and 2008 they were the 25th most popular. They ranked higher in some individual US cities in the 2008 statistics, being eighth in both Nashville and Minneapolis-St.Paul, seventh in Boston, Atlanta and Washington D.C., and sixth in both New York City and San Francisco. The breed's popularity has continued to grow, ranking in 18th place in 2013. In 2009, the Cavalier was the fourth most popular breed in Australia with 3,196 registrations behind only Labrador Retrievers, German Shepherd Dogs and Staffordshire Bull Terriers. In addition, there are also national breed clubs in Belgium, Canada, Czech Republic, Denmark, Finland, France, Germany, Netherlands, New Zealand, Norway, South Africa, Spain and Sweden. 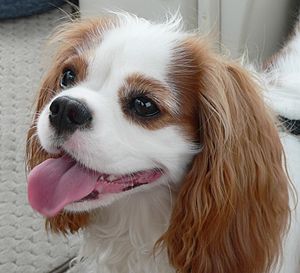 The breed is highly affectionate, playful, extremely patient and eager to please. As such, dogs of the breed are good with children and other dogs. Cavaliers are not shy about socialising with much larger dogs. They will adapt quickly to almost any environment, family, and location and suit city and country life. Their ability to bond with larger and smaller dogs makes them ideal in houses with more than one breed of dog as long as the other dog is trained. Cavaliers rank 44th in Stanley Coren's The Intelligence of Dogs, being of average intelligence in working or obedience. Cavaliers are naturally curious and playful, but also enjoy simply cuddling up on a cushion or lap, making them excellent companion or lap dogs for medical patients and the elderly.

Cavaliers are active and sporting. Cavaliers are successful in conformation shows, obedience and agility and they also make wonderful therapy dogs due to their sweet, gentle natures. The breed is adaptable in their need for exercise, happy with either sleeping on the couch or taking long walks. 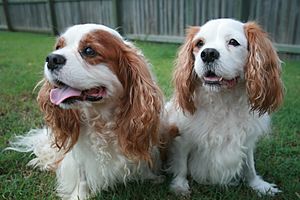 The breed is well known for its loving temperament

They have an instinct to chase most things that move including vehicles on busy streets, and so most Cavaliers will never become "street-wise". As they tend to regard all strangers as friends, members of the breed will usually not make good guard dogs. Spaniels have a strong hunting instinct and may endanger birds and small animals. However, owners have reported that through training their Cavaliers live happily with a variety of small animals including hamsters and gerbils.

The Cavalier's coat requires weekly brushing, but no trimming. However, some owners prefer to trim their Cavalier's long feathers and slippers which can become very dirty when walking or playing outside.

All content from Kiddle encyclopedia articles (including the article images and facts) can be freely used under Attribution-ShareAlike license, unless stated otherwise. Cite this article:
Cavalier King Charles Spaniel Facts for Kids. Kiddle Encyclopedia.