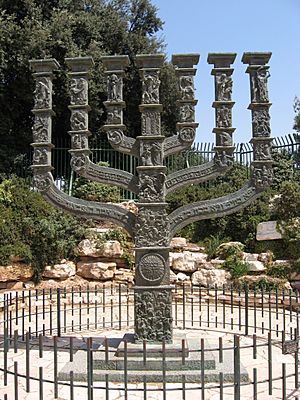 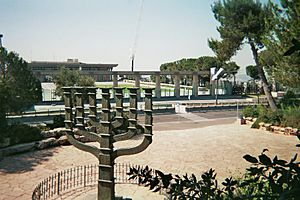 Knesset Menorah and the Knesset

The Knesset Menorah is a bronze Menorah 4.30 meters high, 3.5 meters wide, and weighs 4 tons. It is located at the edge of Gan Havradim (Rose Garden) opposite the Knesset.

It was designed by Benno Elkan (1877–1960), a Jewish sculptor who escaped from his native Germany to Britain. All in all he spent almost ten years on the project, much of it in research, because he wanted to create a unique work which would tell the millennia-old history of the nation of Israel.

It was presented to the Knesset as a gift from the Parliament of the United Kingdom on April 15, 1956 in honor of the eighth anniversary of Israeli independence. The gift would symbolize the admiration of the British Parliament for the new state and its government.

The choice of the Menorah-symbol as a gift is based on the emblem of the State of Israel, chosen by the first Knesset. The outline of the Knesset Menorah and that appearing on Israel's state emblem are both based on the Menorah from the Arch of Titus in Rome.

A series of bronze reliefs on the Menorah depict the struggles to survive of the Jewish people, depicting formative events, images and concepts from the Hebrew Bible and Jewish history. It has been described as a visual "textbook" of Jewish history.

The engravings on the six branches of the Menorah portray episodes since the Jewish exile from Eretz Yisrael. Those on the center branch portray the fate of the Jews from the return to the land to the establishment of the State.

The Menorah was received, in fact, with excitement and enthusiasm by almost all the sections of the country, including the religious ones, and for its decades of existence it serves as a place of pilgrimage for Jews and non-Jews visiting Jerusalem.

All content from Kiddle encyclopedia articles (including the article images and facts) can be freely used under Attribution-ShareAlike license, unless stated otherwise. Cite this article:
Knesset Menorah Facts for Kids. Kiddle Encyclopedia.