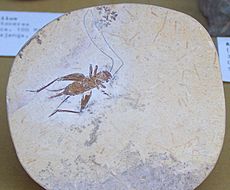 Fossil of a locust from the Santana formation

The Santana Formation is a high quality fossil site in Brazil. It is in northeastern Brazil's Arar ipe Basin. It qualifies as a Lagerstätte, which means it is one of the best fossil sites, with many undisturbed fossils.

The strata come from the Lower Cretaceous, laid down about 92 million years ago in a shallow inland sea.

Some 25 species of fish are found, many with stomach contents preserved. This lets palaeontologists study predator–prey relationships in the ecosystem. There are also fine examples of pterosaurs, reptiles, amphibians, invertebrates (especially insects) and plants. Even dinosaurs are found here: a new maniraptor was described in 1996.

Limestone nodules formed around dead organisms; this preserved even the soft parts of their anatomy. The limestone was etched away using a mild acid. The fossils were then preserved by the 'transfer technique' which means they were embedded in a plastic resin such as polyester or epoxy.

The nearby Crato Formation is also a lagerstätte. It was produced in similar conditions, about 10 million years before the Santana Formation.

Various remains of non-avian theropods, avialans, ornithischians, and possibly oviraptorosaurs have been found in Estado do Ceara, Brazil. Examples are spinosaurs like Irritator and maniraptors like Santanaraptor.

The pterosaurs are all pterodactyls, because the long-tailed rhamphorhynchoidea died out at the Jurassic–Cretaceous junction. Ornithocheirus and Tupuxuara are examples. The inland sea also had turtles, such as Santanachelys.

All content from Kiddle encyclopedia articles (including the article images and facts) can be freely used under Attribution-ShareAlike license, unless stated otherwise. Cite this article:
Santana Formation Facts for Kids. Kiddle Encyclopedia.