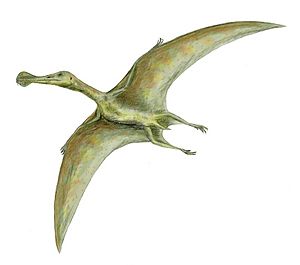 Ornithocheirus (from Ancient Greek "ὄρνις", meaning bird, and "χεῖρ", meaning hand) is a pterosaur genus known from fragmentary fossil remains uncovered from sediments in the UK.

There was an ornithocheirus in Walking with Dinosaurs.

Several species have been referred to the genus, most of which are now considered as dubious species, or members of different genera, and the genus is now often considered to include only the type species, Ornithocheirus simus. Species have been referred to Ornithocheirus from the mid-Cretaceous period of both Europe and South America, but O. simus is known only from the UK. Because O. simus was originally named based on poorly preserved fossil material, the genus Ornithocheirus has suffered enduring problems of zoological nomenclature.

Fossil remains of Ornithocheirus have been recovered mainly from the Cambridge Greensand of England, dating to the beginning of the Albian stage of the early Cretaceous period, about 110 million years ago. Additional fossils from the Santana Formation of Brazil are sometimes classified as species of Ornithocheirus, but have also been placed in their own genera, most notably Tropeognathus.

O. simus is only known from fragmentary jaw tips. It bore a distinctive convex "keeled" crest on its snout. Ornithocheirus had relatively narrow jaw tips compared to Anhanguera and Coloborhynchus, which had prominently-expanded rosettes of teeth. Also unlike related pterosaurs, the teeth of Ornithocheirus were mostly vertical, rather than set at an outward-pointing angle.

It was believed in the past that Ornithocheirus was one of the largest pterosaurs to have existed, with a wingspan possibly measuring 40 feet wide. However, this is a highly exaggerated number, as the animal's wingspan likely measured 15 to 20 feet wide, which would make it a medium-sized pterosaur. A related species called Tropeognathus had a wingspan measuring between 20 to 25 feet wide.

All content from Kiddle encyclopedia articles (including the article images and facts) can be freely used under Attribution-ShareAlike license, unless stated otherwise. Cite this article:
Ornithocheirus Facts for Kids. Kiddle Encyclopedia.