Pterodactylus (meaning "winged finger") is an extinct genus of pterosaurs, whose members are commonly known as pterodactyls. It is thought to contain only a single species, Pterodactylus antiquus, the first pterosaur species to be named and identified as a flying reptile.

The fossil remains of this species have been found primarily in the Solnhofen limestone of Bavaria, Germany, dated to the late Jurassic Period (early Tithonian), about 150.8–148.5 million years ago, though more fragmentary remains have been tentatively identified from elsewhere in Europe and in Africa.

It was a carnivore and probably preyed upon fish and other small animals. Like all pterosaurs, Pterodactylus had wings formed by a skin and muscle membrane stretching from its elongated fourth finger to its hind limbs. It was supported internally by collagen fibres and externally by keratinous ridges. 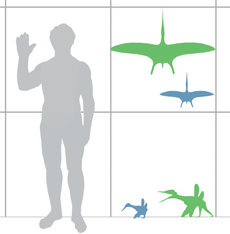 Size of the sub-adult holotype (blue) and adult (green) specimens in both flying and standing postures, compared with a human

Pterodactylus is known from over 30 fossil specimens, and though most of those are juveniles, many preserve complete skeletons. Pterodactylus antiquus was a relatively small pterosaur, with an estimated adult wingspan of about 1.04 meters (3 feet 5 inches) (the only known adult specimen is represented by an isolated skull). Other "species" were once thought to be smaller. However, these smaller specimens have been shown to represent juveniles of Pterodactylus, as well as its contemporary relatives including Ctenochasma, Germanodactylus, Aurorazhdarcho, Gnathosaurus (and hypothetically Aerodactylus if this genus is truly valid).

The skulls of adult Pterodactylus were long and thin with about 90 narrow, conical teeth. The teeth extended back from the tips of both jaws, and became smaller farther away from the jaw tips (unlike some relatives, where teeth were absent in the upper jaw tip and were relatively uniform in size). The teeth extended farther back into the jaw than in close relatives, as some were present below the front of the nasoantorbital fenestra, the largest opening in the skull. Unlike related species, the skull and jaws were straight, not curved upwards.

Life restoration of BMMS 7, the largest known pterodactyl specimen. The shape of the soft tissue crest is based on BSP 1929.

Pterodactylus, like related pterosaurs, had a crest on its skull composed mainly of soft tissues. In adult Pterodactylus, this crest extended between the back edge of the antorbital fenestra (the largest opening in the skull) and the back of the skull. In at least one specimen, the crest had a short bony base, also seen in related pterosaurs like Germanodactylus. Solid crests have only been found on large, fully adult specimens of Pterodactylus, indicating that this was a display structure that became larger and more well developed as individuals reached maturity. Bennett (2013) noted that other authors claimed that the soft tissue crest of Pterodactylus extended backward behind the skull; Bennett himself, however, didn't find any evidence for the crest extending past the back of the skull. Two specimens of P. antiquus (the holotype specimen BSP AS I 739 and the incomplete skull BMMS 7, the largest known skull of P. antiquus) have a low bony crest on their skulls; in BMMS 7 it is 47.5 mm long (1.87 inches, more or less 24% of the estimated total length of its skull) and has a maximum height of 0.9 mm (0.035 inches) above the orbit. Several specimens previously referred to P. antiquus preserved evidence of the soft tissue extensions of these crests, including an "occipital lappet", a flexible, tab-like structure extending from the back of the skull.

All content from Kiddle encyclopedia articles (including the article images and facts) can be freely used under Attribution-ShareAlike license, unless stated otherwise. Cite this article:
Pterodactylus Facts for Kids. Kiddle Encyclopedia.