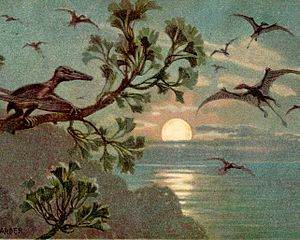 Several Rhamphorhynchus (flying) and a perching Pterodactylus, by Heinrich Harder, 1916.

Rhamphorhynchus had a long tail, stiffened with ligaments, which ended in a small diamond-shaped rudder on the end of its tail which helped keep it stable when it was flying.

The jaws of Rhamphorhynchus housed needle-like teeth, which were angled forward, with a curved, sharp, beak-like tip lacking teeth. Their diet was mainly fish and insects.

Like other pterosaurs, its body was covered with hairs, which suggests it had termperature regulation ('hot-blooded') and a high rate of metabolism. This is also found in birds and bats, and seems necessary for active flight.

The genus was quite successful: it is the most common pterosaur found in the Solnhofen limestone beds in Bavaria, Germany. These are the same strata where Archaeopteryx was found.

This early group flourished from the Upper Triassic to the end of the Jurassic. When we first see them in the fossil record they have developed three families, so biologists know their early evolution is not yet revealed.p240, 246 These three families are represented by the three genera Rhamphorhynchus, Dimorphodon and Eudimorphodon. This sub-order was the earliest kind or pterosaur, which were succeeded by the more 'derived' short-tailed pterosaurs, the Pterodactyloids, such as Pterodactylus. In the Upper Jurassic both the two sub-orders were extant (living).

The group always has a long tail, stiffened by rod-like bony tendons to keep it straight. This indicates their flight was extremely stable, which means it kept on course, and did not dart about much. This feature is also found in Archaeopteryx and in early bats, and in insects like dragonflies.

It can be interpreted like this. To dart about quickly requires special advanced brains and reflexes to keep control. Later birds and pterosaurs had extra 'control wiring' in their brains, but early ones did not. The evidence for this is the extra size of pterodactyl and bird brains compared with the reptile brains the groups started out with. That much of this increase is connected to seeing and flying is clear from how bird brains work.

The analogy would be planes. Early planes were highly stable, and so are airliners. Fighter planes are fundamentally much less stable, and have to be in order to jink about. This needs such fast reactions that the details are worked out by computer, with the pilot indicating where to go.

It requires more 'brains' to control an unstable craft than it does a stable one. And the same principle applies to pterosaurs, birds and bats. Early birds, bats, pterosaurs and insects were all more stable, with tails or (insects) long abdomens. This helped the flying animal to keep on track, which is what we mean by 'stable'.

All species in the group have teeth. The group died out at the end of the Jurassic, which suffered a minor extinction event.p270

This classification is simple, but unfortunately it is paraphyletic, because the two suborders are not sister groups. But there is not enough evidence to see which earlier group the pterodactyloids arose from. So this is the best we can do:

All content from Kiddle encyclopedia articles (including the article images and facts) can be freely used under Attribution-ShareAlike license, unless stated otherwise. Cite this article:
Rhamphorhynchus Facts for Kids. Kiddle Encyclopedia.