Nyctosaurus is a genus of pterodactyloid pterosaur, the remains of which have been found in the Niobrara Formation of the mid-western United States, which, during the late Cretaceous Period, was covered in an extensive shallow sea. The genus Nyctosaurus has had numerous species referred to it, though how many of these may actually be valid requires further study. At least one species possessed an extraordinarily large antler-like cranial crest. 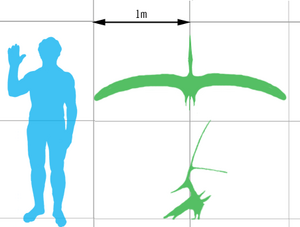 Size of a mature, crested specimen (green) compared with a human

Nyctosaurus was similar in anatomy to its close relative and contemporary, Pteranodon. It had relatively long wings, similar in shape to modern seabirds. However, it was smaller overall than Pteranodon, with an adult wingspan of 2 meters (6.6 feet) and a maximum weight of about 1.86 kg. The overall body length was 37 cm. Some specimens preserve a distinctive crest, at least 55 cm tall in old adults, relatively gigantic compared to the rest of the body and over three times the length of the head. The crest is composed of two long, grooved spars, one pointed upward and the other backward, arising from a common base projecting up and back from the back of the skull. The two spars were nearly equal in length, and both were nearly as long or longer than the total length of the body. The upward-pointing crest spar was at least 42 cm (1.38 ft) long and the backward-pointing spar was at least 32 cm (1.05 ft) long.

The jaws of Nyctosaurus were long and extremely pointed. The jaw tips were thin and needle sharp, and are often broken off in fossil specimens, giving the appearance that one jaw is longer than the other, though in life they were probably equal in length.

Nyctosaurus is the only known pterosaur to have lost its clawed "fingers", with the exception of the wing finger (of which, however, the fourth phalanx was lost), which is likely to have impaired its movement on the ground, leading scientists to conjecture that it spent almost all of its time on the wing and rarely landed. In particular, the lack of claws with which to grip surfaces would have made climbing or clinging to cliffs and tree trunks impossible for Nyctosaurus. 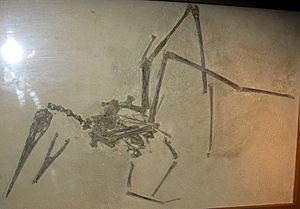 The first Nyctosaurus fossils were described in 1876 by Othniel Charles Marsh, based on fragmentary material, holotype YPM 1178, from the Smoky Hill River site in Kansas. Marsh referred the specimen to a species of his new genus Pteranodon, as Pteranodon gracilis. Later that year, Marsh reclassified the species in its own genus, which he named Nyctosaurus, meaning "night lizard" or "bat lizard", in reference to the wing structure somewhat paralleling those of bats. In 1881, Marsh incorrectly assumed the name was preoccupied and changed it into Nyctodactylus, which thus is now a junior synonym. In 1902, Samuel Wendell Williston described the most complete skeleton then known (P 25026) discovered in 1901 by H. T. Martin. In 1903, Williston named a second species, N. leptodactylus, but this is today considered identical to N. gracilis. 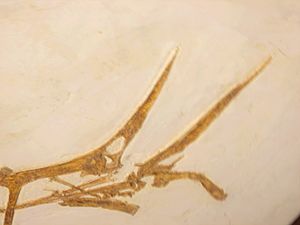 Cast of a crested specimen

In 1953, Llewellyn Ivor Price named a partial humerus, DGM 238-R found in Brazil, N. lamegoi; the specific name honours the geologist Alberto Ribeiro Lamego. This species has an estimated wingspan of four metres; today, it is generally considered to be a form different from Nyctosaurus, but has not yet been assigned its own genus name. 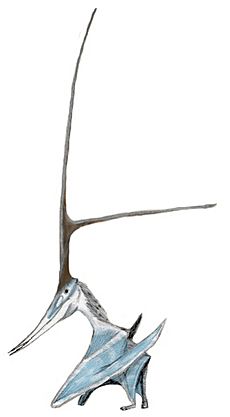 Drawing of Nyctosaurus in a quadrupedal walking position

Nyctosaurus, like its relative Pteranodon, appears to have grown very rapidly after hatching. Fully adult specimens are no larger than some immature specimens such as P 25026 (pictured below), indicating that Nyctosaurus went from hatching to adult size (with wingspans of 2 m or more) in under a year. Some sub-adult specimens have been preserved with their skulls in nearly pristine condition, and lack any trace of a head crest, indicating that the distinctively large crest only began to develop after the first year of life. The crest may have continued to grow more elaborate as the animal aged, though no studies have examined the age of the fully adult, large-crested specimens. These individuals may have been 5 or even 10 years old at the time of their deaths. 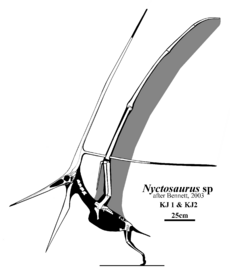 Restoration of a crested specimen

Only five relatively complete Nyctosaurus skulls have been found. Of those, one is juvenile and does not possess a crest (specimen FMNH P 25026), and two are more mature and may show signs of having had a crest but are too badly crushed to say for sure (FHSM 2148 and CM 11422). Two specimens (KJ1 and KJ2) described in 2003, however, preserved an enormous double-pronged crest.

It is likely that the crest acted mainly for display. 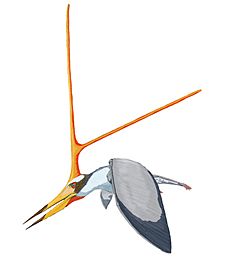 Artist's impression of a crested specimen

Sankar Chatterjee and R.J. Templin used estimates based on complete Nyctosaurus specimens to determine weight and total wing area, and to calculate its total wing loading. They also estimated its total available flight power based on estimated musculature. Using these calculations, they estimated the cruising speed of Nyctosaurus gracilis as 9.6 meters/second (34.5 kilometers/hour or 21.4 miles/hour).

All content from Kiddle encyclopedia articles (including the article images and facts) can be freely used under Attribution-ShareAlike license, unless stated otherwise. Cite this article:
Nyctosaurus Facts for Kids. Kiddle Encyclopedia.