Kids Encyclopedia Facts
Not to be confused with Wulagasaurus.

Woolungasaurus ('Woolunga lizard', named after an Aboriginal mythical reptile, Persson 1960) is a plesiosaur, an extinct marine reptile, belonging to the Elasmosauridae.

The type species, Woolungasaurus glendowerensis, was named after Glendower Station by Per Ove Persson in 1960, is known from a partial skeleton, holotype QM F6890, (forty-six vertebrae, ribs, forearms, shoulder girdle and part of the rear limbs) unearthed from the Wallumbilla Formation (Albian, Lower Cretaceous) of the Richmond District, Queensland, Australia. Another find of undetermined species, consisting of twelve vertebrae, was unearthed from the Maree Formation (Cretaceous, of uncertain age) of Neales River, near Lake Eyre, South Australia. In addition a skull from Yamborra Creek, near Maxwelltown, Queensland, described by Persson in 1982 has been referred to Woolungasaurus.

Woolungasaurus appears to have been a typical elasmosaur, with forty sharp teeth and an estimated length of about 9.5 metres (31 ft). Persson (1982) believes it to be closely related to the North American elasmosaur Hydralmosaurus. 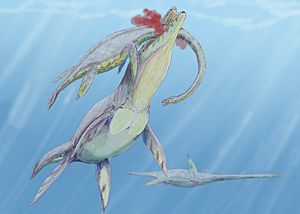 The genus was referred to Styxosaurus by Sven Sachs in 2004.

All content from Kiddle encyclopedia articles (including the article images and facts) can be freely used under Attribution-ShareAlike license, unless stated otherwise. Cite this article:
Woolungasaurus Facts for Kids. Kiddle Encyclopedia.