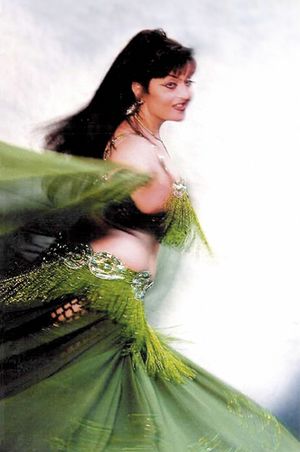 A belly dance is a Middle Eastern type of dancing. In the Arabic language, it is called raqs sharqi (رقص شرقي, which means "oriental dance"). The dance involves movement of many different parts of the body; usually in a circular way. The term "Belly dance" is translated from the French "danse du ventre". However, this dance is done by every part of the body. The most featured body part usually is the hips. Belly dancing is very different depending on country and region, both in costume and dance style.

Another theory is that belly dance was originally danced by women for women in the Levant, and North Africa.

All content from Kiddle encyclopedia articles (including the article images and facts) can be freely used under Attribution-ShareAlike license, unless stated otherwise. Cite this article:
Belly dance Facts for Kids. Kiddle Encyclopedia.