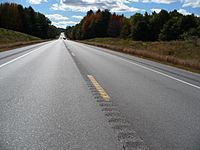 A lane is a part of a highway that can be used by one line of vehicles. Most roads have two or more lanes, with at least one lane for traffic going each way. In Great Britain a narrow rural road is called a lane.

Some roads have a center lane to make it easier for cars and trucks to turn. There can also be turn lanes on the outer part of the road. If roads have more than one lane going in one direction, cars in the outer lanes usually go faster than cars in the inner lanes. Highways may also have express lanes that can only be used for certain types of vehicles, like those carrying two or more people. Lanes in most jurisdictions have rules for minimum and maximum lane widths. In the United States the Federal Highway Administration has recommended lane widths for US highways and interstates.

All content from Kiddle encyclopedia articles (including the article images and facts) can be freely used under Attribution-ShareAlike license, unless stated otherwise. Cite this article:
Lane Facts for Kids. Kiddle Encyclopedia.