The pair of tunnels is 7,650 feet (1.45 mi; 2.33 km) long, stretching from the south shore of the Patapsco River to the north shore near Dundalk. Each tunnel is 22 feet (6.7 m) wide and 14 feet (4.3 m) high, and accommodates two lanes in each direction. The maximum speed within the tunnel is 50 miles per hour (80 km/h). Two-way traffic may occur in either tunnel for overnight roadwork or during emergencies that close down one of the tunnels. During implementation of two-way traffic, drivers may experience 15-20 minute delays while two-way operations are being setup. When one lane of southbound and northbound traffic are directed into the tunnel that remains open are implemented. The MDTA uses traffic cones and barrels to act as a crossover before and after the tunnel. So traffic can safely crossover to the northbound or the southbound sides of the roadway after the tunnel. The Tunnel has lane control signals to control which lanes are open,closed or as contra-flow traffic. 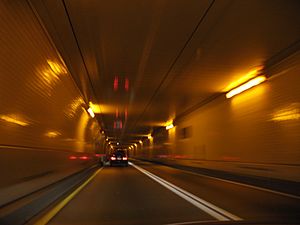 As of July 1, 2015, the toll rate for cars is $4.00 cash or $3.00 E-ZPass, paid in either direction. Vehicles with more than two axles pay additional amounts, up to $30.00 for six axles. In March 2020, all-electronic tolling was implemented as a result of the COVID-19 pandemic, with tolls payable through E-ZPass or Video Tolling, which uses automatic license plate recognition. All-electronic tolling was made permanent in August 2020. 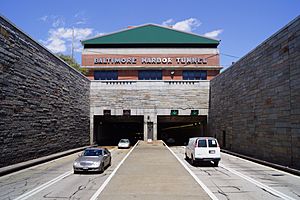 The southwestern entrance of the tunnel 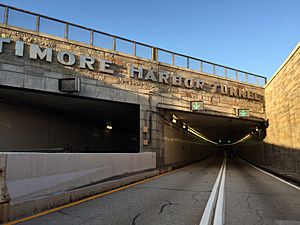 The northeastern entrance of the tunnel

The tunnel and approaches were designed by Singstad and Baillie, a New York-based engineering firm specializing in tunnel design, in association with the J. E. Greiner Company, a local Baltimore-based firm. The tunnel was formed out of twenty-one 310-foot-long (94 m) sections individually submerged into the harbor and secured with rocks and backfill; the first of these tunnel segments was sunk on April 11, 1956. The remainder of the tunnel was constructed using the cut-and-cover method, extending from the submerged tubes to the north and south portals. The project's costs would ultimately reach $150 million ($1,136 million in 2018).

The tunnel opened on November 29, 1957 with a dedication by Maryland Governor Theodore McKeldin and a crowd of 4,000 spectators. The initial toll for standard cars was forty cents. In the first 12 hours of operation, the tunnel handled an estimated 10,000 vehicles, mostly drivers from Maryland. In the same period, the tunnel also experienced its first collision (15 minutes after opening), first flat tire and first stalled vehicle.

The tunnel was considered a success by the Maryland Transportation Authority (MDTA), as it eliminated 51 traffic signals for through-traffic in Baltimore, and reduced neighborhood street commercial traffic by up to 40%. However, increased tunnel usage and high traffic volume led to the planning, construction, and opening of the nearby Fort McHenry Tunnel in 1985, creating the final link of Interstate 95 in Maryland. The Harbor Tunnel was then closed in phases for extensive rehabilitation, beginning in March 1987. It was fully reopened by 1990.

In November 2007, the 50th anniversary of the tunnel serving travelers was observed. In November 2018, the MDTA started a multi-year project to replace the I-895 bridge spans north of the tunnel. The $189m project also includes $28m to repair and upgrade the tunnel itself; the entire project is scheduled to be completed by summer 2021.

All content from Kiddle encyclopedia articles (including the article images and facts) can be freely used under Attribution-ShareAlike license, unless stated otherwise. Cite this article:
Baltimore Harbor Tunnel Facts for Kids. Kiddle Encyclopedia.