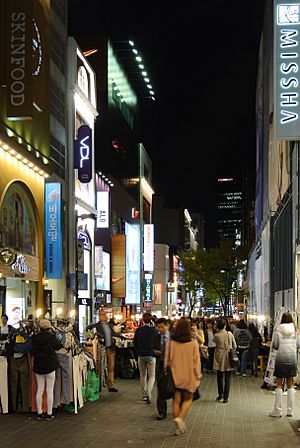 A shopping street of Myeong-dong by night

Myeong-dong (Korean: 명동, literally means 'bright town') is an area in Jung-gu, Seoul, South Korea. It is mostly a commercial area, being one of the main shopping and tourism districts in Seoul.

Actually, Myeong-dong is not an original name and it was not known as a commercial area at first. During the Joseon Dynasty era, it was mostly a residential district called Myeongryebang (명례방). Later on, under the Japanese colonization, the name was changed to Myeongchijeong (명치정). It started to be more like a commercial district during that colonial period. Finally it was changed to the current name, Myeong-dong in 1946, after independence.

In Myeong-dong, there are several large department stores and shopping malls such as Lotte (롯데백화점), Shinsegae (신세계), Migliore and Noon square. Also, the main streets are lined with lots of clothing shops, cosmetics stores, and international retailers.

This area has become more and more international. The survey targeted 12,000 tourists departing Korea, and 55.3% answered that their major tourist destination was Myeong-dong, and it is one of the most popular shopping spots. Favorite items are Korean cosmetics such as Missha and Nature Republic, and there are most of Korean cosmetics brand stores on the main street of Myeong-dong. Therefore, it is necessary for those stores to hire bilingual staffs fluent in English, Japanese, or Chinese, and it attracts more and more foreign shoppers.

All content from Kiddle encyclopedia articles (including the article images and facts) can be freely used under Attribution-ShareAlike license, unless stated otherwise. Cite this article:
Myeong-dong Facts for Kids. Kiddle Encyclopedia.