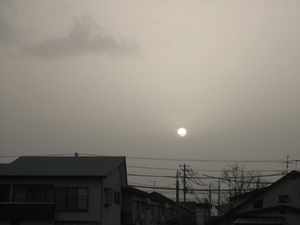 Asian Dust (also yellow dust, yellow sand, yellow wind, or China dust storms) is a weather occurrence that happens each year. It affects much of East Asia during the spring. The dust comes from deserts in Mongolia, northern China, and Kazakhstan. The dust comes from surface winds and dust storms in the desert. The wind carries the clouds eastward to China, Japan, Eastern Siberia, and the Koreas. Smaller particles in the clouds can travel much farther to places like the United States. In the last ten years, these dust storms have become a serious problem because they have picked up industrial pollutants.

All content from Kiddle encyclopedia articles (including the article images and facts) can be freely used under Attribution-ShareAlike license, unless stated otherwise. Cite this article:
Asian Dust Facts for Kids. Kiddle Encyclopedia.