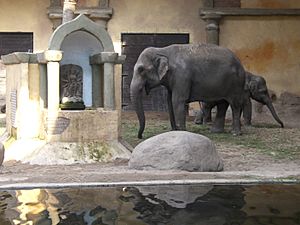 Tierpark Hagenbeck (translated as Animal park Hagenbeck) is the name of the largest zoo in Hamburg, Germany. The park was founded by Carl Hagenbeck in 1907. His father was a fishmonger (a person who buys and sells fish). It is the first zoo in the world to use moats (a moat is a large hole or trench. Animals do not dare cross it). This was done instead of using cages with bars, so the animals would feel more at home.

Bombs in the Second World War completely destroyed the zoological garden. With much help from the founding family, it was rebuilt after the war. Two Indian Elephants helped to clear the rubble in the zoo.

There are 210 different species in the Tierpark Hagenbeck. The sadness is the only swan which is almost completely black, the Mourning swan. There are also mandrills and baby elephants but no tapir. There is breeding for Orangutan, North Chinese leopard and giant otters from South America.

All content from Kiddle encyclopedia articles (including the article images and facts) can be freely used under Attribution-ShareAlike license, unless stated otherwise. Cite this article:
Tierpark Hagenbeck Facts for Kids. Kiddle Encyclopedia.