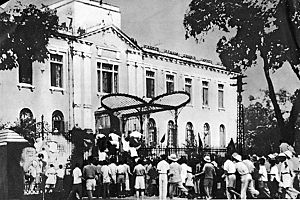 The August Revolution happened in Vietnam in August 1945. It was an uprising for independence after the Japanese lost World War II. It led to the Declaration of Independence of the Democratic Republic of Vietnam on September 2, 1945. The independence war against the French would soon follow.

All content from Kiddle encyclopedia articles (including the article images and facts) can be freely used under Attribution-ShareAlike license, unless stated otherwise. Cite this article:
August Revolution Facts for Kids. Kiddle Encyclopedia.