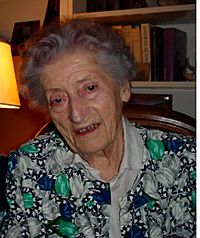 Lucie Samuel (29 June 1912 – 14 March 2007), born Lucie Bernard, and better known as Lucie Aubrac, was a French history teacher. She was a member of the French Resistance during World War II.

Aubrac died in Issy-les-Moulineaux, near Paris, on 14 March 2007, aged 94. She was survived by her three children and her husband, Raymond Aubrac.

All content from Kiddle encyclopedia articles (including the article images and facts) can be freely used under Attribution-ShareAlike license, unless stated otherwise. Cite this article:
Lucie Aubrac Facts for Kids. Kiddle Encyclopedia.