The Neil Armstrong Operations and Checkout Building (O&C) (previously known as the Manned Spacecraft Operations Building) is a historic building on Merritt Island, Florida, United States. The five-story structure is in the Industrial Area of NASA's Kennedy Space Center. Its facilities include the crew quarter dormitories for astronauts, and suit-up preparations prior to their flights. The other facility is a large spacecraft workshop used for manufacturing and checking activities on crewed spacecraft. On January 21, 2000, it was added to the U.S. National Register of Historic Places.

When it was originally built in 1964 to process spacecraft in the Gemini and Apollo era, it was known as the Manned Spacecraft Operations Building. It was renamed the Operations and Checkout Building during the Shuttle program, known informally as the O&C. 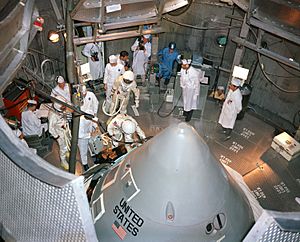 The Apollo 1 crew, Gus Grissom, Ed White and Roger Chaffee, enter their spacecraft for a test in the O&C altitude chamber on October 18, 1966.

In 1965, a pair of altitude chambers were installed in the High Bay for testing the environmental and life support systems of both the Apollo Command/Service Module and Lunar Module at simulated altitudes of up to 250,000 feet (76 km). Each chamber is 58 feet (18 m) high (with a clear working height of 28 feet (8.5 m)) and an interior diameter of 33 feet (10 m), were human-rated, and capable of reaching the maximum altitude (minimum pressure) in one hour. These were used by the prime and backup crews of all crewed missions, from the ill-fated Apollo 1 in October 1966, through to the Apollo-Soyuz Test Project in July 1975.

During the 1980s and 90s the O&C building was used to house and test Spacelab science modules before their flights aboard the Space Shuttle.

In the late 1990s and 2000s, some modules and trusses for the International Space Station were checked out in the building.

On January 30, 2007, NASA held a ceremony to mark the transition of the building's high bay for use by the Constellation program. The building would serve as the final assembly facility for the Orion crew exploration vehicle. In preparation for the transition, the state of Florida provided funds to clear the facility of about 50 short tons (45 metric tons) of steel stands, structures and equipment. Renovations totaling $55 million took place from June 2007 through January 2009, at which point Lockheed Martin became the operator of the facility for Orion production. The Orion spacecraft for Artemis 1 will complete its assembly in this location before being handed to launch operations.

The building was renamed to the Neil Armstrong Operations and Checkout Building in a ceremony on the 45th anniversary of Apollo 11 (2014).

All content from Kiddle encyclopedia articles (including the article images and facts) can be freely used under Attribution-ShareAlike license, unless stated otherwise. Cite this article:
Operations and Checkout Building Facts for Kids. Kiddle Encyclopedia.