Derviş Mehmed Zillî (25 March 1611 – 1682), known as Evliya Çelebi (Ottoman Turkish: اوليا چلبى), was an Ottoman explorer who travelled through the territory of the Ottoman Empire and neighboring lands over a period of forty years, recording his commentary in a travelogue called the Seyâhatnâme ("Book of Travel"). The name Çelebi is an honorific title meaning "gentleman" or "man of God" (see pre-1934 Turkish naming conventions). 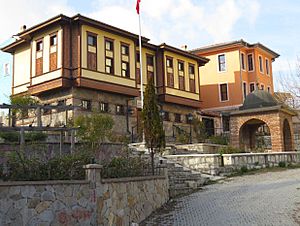 The house of Evliya Çelebi in Kütahya, now used as a museum

Evliya Çelebi was born in Constantinople in 1611 to a wealthy family from Kütahya. Both his parents were attached to the Ottoman court, his father, Derviş Mehmed Zilli, as a jeweller, and his mother as an Abkhazian relation of the grand vizier Melek Ahmed Pasha. In his book, Evliya Çelebi traces his paternal genealogy back to Khoja Akhmet Yassawi, an early Sufi mystic. Evliya Çelebi received a court education from the Imperial ulama (scholars). He may have joined the Gulshani Sufi order, as he shows an intimate knowledge of their khanqah in Cairo, and a graffito exists in which he referred to himself as Evliya-yı Gülşenî ("Evliya of the Gülşenî").

A devout Muslim opposed to fanaticism, Evliya could recite the Quran from memory and joked freely about Islam. Though employed as clergy and entertainer in the Imperial Court of Sultan Murad IV Evliya refused employment that would keep him from travelling. Çelebi had studied vocal and instrumental music as a pupil of a renowned Khalwati dervish by the name of 'Umar Gulshani, and his music gifts earned him much favor at the Imperial Palace impressing even the chief musician Amir Guna. He was also trained in the theory of music called ilm al-musiqi.

His journal writing began in Constantinople, taking notes on buildings, markets, customs and culture, and in 1640 it was extended with accounts of his travels beyond the confines of the city. The collected notes of his travels form a ten-volume work called the Seyahatname ("Travelogue"). Departing from the Ottoman literary convention of the time, he wrote in a mixture of vernacular and high Turkish, with the effect that the Seyahatname has remained a popular and accessible reference work about life in the Ottoman Empire in the 17th century, including two chapters on musical instruments.

Evliya Çelebi died in 1684, it is unclear whether he was in Istanbul or Cairo at the time.

During his travels in South Slavic regions of the Ottoman Empire Çelebi visited various regions of the modern-day Croatia including northern Dalmatia, parts of Slavonia, Međimurje and Banija. He recorded variety of historiographic and ethnographic sources. They included descriptions of first hand encounters, third party narrator witnesses and invented elements. 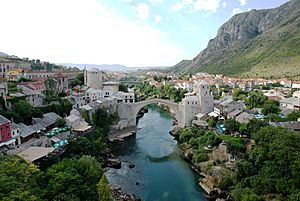 The Old Bridge in Mostar

Evliya Çelebi visited the town of Mostar, then in Ottoman Bosnia and Herzegovina. He wrote that the name Mostar means "bridge-keeper", in reference to the town's celebrated bridge, 28 meters long and 20 meters high. Çelebi wrote that it "is like a rainbow arch soaring up to the skies, extending from one cliff to the other. ...I, a poor and miserable slave of Allah, have passed through 16 countries, but I have never seen such a high bridge. It is thrown from rock to rock as high as the sky."

In 1660 Çelebi went to Kosovo which is a toponym in Serbian language and referred to the central part of the region as Arnavud (آرناوود) and noted that in Vučitrn its inhabitants were speakers of Albanian or Turkish and few spoke Serbian. The highlands around the Tetovo, Peć and Prizren areas Çelebi considered as being the "mountains of Arnavudluk". Çelebi referred to the "mountains of Peć" as being in Arnavudluk (آرناوودلق) and considered the Ibar river that converged in Mitrovica as forming Kosovo's border with Bosnia. He viewed the "Kılab" or Lab river as having its source in Arnavudluk (Albania) and by extension the Sitnica as being part of that river. Çelebi also included the central mountains of Kosovo within Arnavudluk.

Çelebi travelled three times in Albania in 1670. He visited the cities Gjirokastra, Berat, Vlorë, Durrës, Ohër, Përmet, Skrapar, and Tepelenë, and wrote about them.

Çelebi claimed to have encountered Native Americans as a guest in Rotterdam during his visit of 1663. He wrote: "[they] cursed those priests, saying, 'Our world used to be peaceful, but it has been filled by greedy people, who make war every year and shorten our lives.'"

While visiting Vienna in 1665–66, Çelebi noted some similarities between words in German and Persian, an early observation of the relationship between what would later be known as two Indo-European languages.

Çelebi visited Crete and in book II describes the fall of Chania to the Sultan; in book VIII he recounts the Candia campaign.

Of oil merchants in Baku Çelebi wrote: "By Allah's decree oil bubbles up out of the ground, but in the manner of hot springs, pools of water are formed with oil congealed on the surface like cream. Merchants wade into these pools and collect the oil in ladles and fill goatskins with it, these oil merchants then sell them in different regions. Revenues from this oil trade are delivered annually directly to the Safavid Shah."

Evliya Çelebi remarked on the impact of Cossack raids from Azak upon the territories of the Crimean Khanate, destroying trade routes and severely depopulating the regions. By the time of Çelebi's arrival, many of the towns visited were affected by the Cossacks, and the only place he reported as safe was the Ottoman fortress at Arabat.

Çelebi wrote of the slave trade in the Crimea:

A man who had not seen this market, had not seen anything in this world. A mother is severed from her son and daughter there, a son—from his father and brother, and they are sold amongst lamentations, cries of help, weeping and sorrow.

In 1667 Çelebi expressed his marvel at the Parthenon's sculptures and described the building as "like some impregnable fortress not made by human agency." He composed a poetic supplication that the Parthenon, as "a work less of human hands than of Heaven itself, should remain standing for all time."

In contrast to many European and some Jewish travelogues of Syria and Palestine in the 17th century, Çelebi wrote one of the few detailed travelogues from an Islamic point of view. Çelebi visited Palestine twice, once in 1649 and once in 1670–1. An English translation of the first part, with some passages from the second, was published in 1935–1940 by the self-taught Palestinian scholar Stephan Hanna Stephan who worked for the Palestine Department of Antiquities. Significant are the many references to Palestine, or "Land of Palestine", and Evliya notes, "All chronicles call this country Palestine."

Çelebi traveled to Circassia and explained it in great detail.

In the whole world, there are no such beauties worthy of praise and love like this people. Also there are purebred Arabian horses here. They are famous in the mountains: martens, similar to sables, wild cats, wild chickens, partridges. They have no temples, no shopping malls and bazaars, no inns and baths. All wanderers and travelers stay with them for the night. And if you are staying as a guest in someone else's home, you will not be harmed. No matter how enemy you are for the owners, all the same, the owner of the camp, together with the neighbors living nearby, will do everything only for your well-being. You will not be blamed for a single mistake. If you ask your owner of the camp or the owner of the house for a chicken, he will show diligence, take a loan; if only he realizes that you need something, he will certainly do everything for you. If you are going to leave feeling embarrassed in something, he will give you, as if the whole world is in his hands. I wrote and spoke very well in all one hundred and forty-seven languages, but I could not write this Circassian language, which is like a magpie shout.

Although many of the descriptions the Seyâhatnâme were written in an exaggerated manner or were plainly inventive fiction or third-source misinterpretation, his notes remain a useful guide to the culture and lifestyles of the 17th century Ottoman Empire. The first volume deals exclusively with Istanbul, the final volume with Egypt.

Currently there is no English translation of the entire Seyahatname, although there are translations of various parts. The longest single English translation was published in 1834 by Joseph von Hammer-Purgstall, an Austrian orientalist: it may be found under the name "Evliya Efendi." Von Hammer-Purgstall's work covers the first two volumes (Istanbul and Anatolia) but its language is antiquated. Other translations include Erich Prokosch's nearly complete translation into German of the tenth volume, the 2004 introductory work entitled The World of Evliya Çelebi: An Ottoman Mentality written by University of Chicago professor Robert Dankoff, and Dankoff and Sooyong Kim's 2010 translation of select excerpts of the ten volumes, An Ottoman Traveller: Selections from the Book of Travels of Evliya Çelebi.

Evliya is noted for having collected specimens of the languages in each region he traveled in. There are some 30 Turkic dialects and languages cataloged in the Seyâhatnâme. Çelebi notes the similarities between several words from the German and Persian, though he denies any common Indo-European heritage. The Seyâhatnâme also contains the first transcriptions of many languages of the Caucasus and Tsakonian, and the only extant specimens of written Ubykh outside the linguistic literature.

In the 10 volumes of his Seyahatname, he describes the following journeys:

All content from Kiddle encyclopedia articles (including the article images and facts) can be freely used under Attribution-ShareAlike license, unless stated otherwise. Cite this article:
Evliya Çelebi Facts for Kids. Kiddle Encyclopedia.