Milton is a town in Sussex County, Delaware, United States, on the Delmarva Peninsula. It is located on the Broadkill River, which empties into Delaware Bay. The population was 2,576 at the 2010 census, an increase of 55.5% over the previous decade.

It is part of the rapidly growing Cape Region and lies within the Salisbury, Maryland-Delaware Metropolitan Statistical Area. Delaware Route 5 passes through Milton.

Located at the head of the Broadkill River, which enters Delaware Bay, Milton was first settled in 1672 by English colonists. It became important for shipbuilding. The town was known by various names until 1807, when it was named for the English poet, John Milton. The Delaware General Assembly passed a charter in 1945 that recognized the Town of Milton as a municipality. 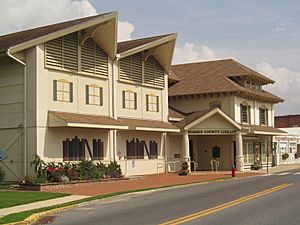 The Sussex County Library, in Milton, is located on Union Street.

History and Milton's shipbuilding heritage remain very important to the town, which is home to some of the finest Victorian and Colonial architecture in Delaware. Many of the homes have been restored to their original form, particularly those on Union and Federal streets.

Milton has 198 contributing structures listed within its Federal Register Historic District. Significant buildings and sites are the Lydia Black Cannon Museum, the Governor James Carey home, the Chestnut Street Cemetery, and the Governor David Hazzard Mansion. The Hazzard House and Gov. James Ponder House were listed on the National Register of Historic Places in 1973. The Milton Historic District was added in 1982.

Milton serves local residents and summer tourists in the Milton, Broadkill Beach and Primehook Beach areas with family-operated businesses and new office and shopping complexes. Several local businesses in the area are served by the Delaware Coast Line Railway, which operates a branch that extends to Milton from Ellendale. Recreational opportunities abound with the Broadkill River, Wagamon's Pond, Diamond Pond and Lavinia Pond. Public boat docks and fishing piers are also available. It is within an easy drive to the coastal resorts of Lewes and Rehoboth Beach, Delaware.

A footpath known as the Governors Walk follows the Broadkill River in central Milton. The Nature Conservancy established a preserve along the river downstream of Milton in 1998. As of 2005[update], an annual canoe and kayak race was being held on the river in Milton. The river passes through and feeds Prime Hook National Wildlife Refuge to the east before entering Delaware Bay. 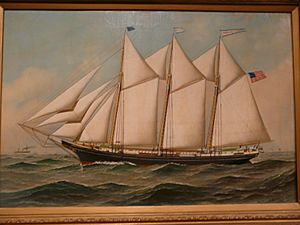 Milton is the home of the Dogfish Head Brewery, a well-known East Coast beer-maker.

Milton is located along the Broadkill River.

There were 700 households, out of which 31.4% had children under the age of 18 living with them, 37.3% were married couples living together, 20.1% had a female householder with no husband present, and 37.4% were non-families. 31.3% of all households were made up of individuals, and 17.4% had someone living alone who was 65 years of age or older. The average household size was 2.33 and the average family size was 2.90.

Cape Henlopen High School is the sole comprehensive high school of the district.

All content from Kiddle encyclopedia articles (including the article images and facts) can be freely used under Attribution-ShareAlike license, unless stated otherwise. Cite this article:
Milton, Delaware Facts for Kids. Kiddle Encyclopedia.