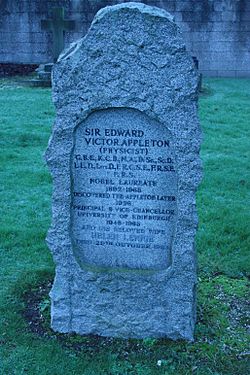 He won the Nobel Prize in Physics in 1947 for his seminal work proving the existence of the ionosphere during experiments carried out in 1924.

All content from Kiddle encyclopedia articles (including the article images and facts) can be freely used under Attribution-ShareAlike license, unless stated otherwise. Cite this article:
Edward Victor Appleton Facts for Kids. Kiddle Encyclopedia.