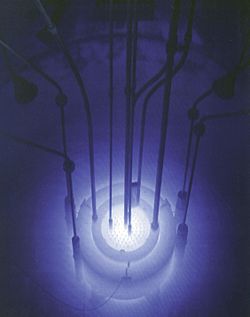 NRC photo of Cherenkov effect in the Reed Research Reactor

Cherenkov radiation, also known as Vavilov–Cherenkov radiation ( Russian: Черенков) is a type of electromagnetic radiation produced by charged particles when they pass through an optically transparent medium at a speed which is greater than the speed of light in that medium. (It doesn't violent the special relativity because, refractive index slows down the speed of light in a medium. So, the particle doesn't have to travel at the speed of light in a vacuum.) It is named after Pavel Alekseyevich Čerenkov who discovered this phenomenon in 1934 under the supervision of Sergey Vavilov. Igor Tamm and Ilya Frank developed a theory on this effect in 1937. Pavel Čerenkov, Igor Tamm and Ilya Frank shared the 1958 Nobel Prize in physics because of their contribution in cherenkov radiation.

According to special relativity, a particle cannot move faster than the speed of light in a vacuum. However, when light travels in a transparent medium (such as water or glass), it moves more slowly than it would in a vacuum. This means that particles can actually move faster than the speed of light in certain mediums. When a particle with an electric charge moves faster than light in a medium which can be polarized, it causes the medium to send out photons (light particles) and thereby loses energy. The photons that are sent out can be measured, as they are simple light. 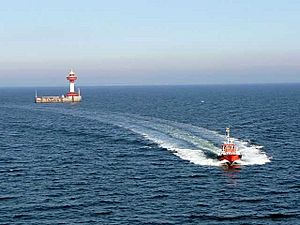 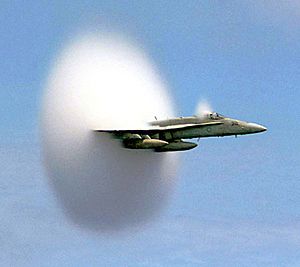 When an aircraft passes through the air, it creates a series of pressure waves in front of the aircraft and behind it. These waves travel at the speed of sound and, as the speed of the object increases, the waves get compressed as they cannot get out of each other's way quickly enough. When the aircraft gets the velocity of sound wave, the pressure waves get merge into a single shock wave. As the velocity keeps increasing, the single shock wave extends mostly to the rear and extends from the craft in a restricted widening cone. We hear this as sonic boom. Similarly, a bow wave forms when something moves through a fluid at a speed greater than the speed of a wave moving across the fluid. The mechanism of Cherenkov radiation is same but it occurs for light waves.

When a charged particle moves inside a polarizable medium, it excites some the ellectrons of that medium. As the excited ellectrons return to their ground state, they emits electromagnetic radiation. According to the Huygens principle, the emitted waves move out spherically at the phase velocity of that medium. If the particle moves faster than the speed of light in that medium, the emitted waves add up and at an angle with respect to the particle direction a radiation is emitted which is known as Cherenkov radiation. 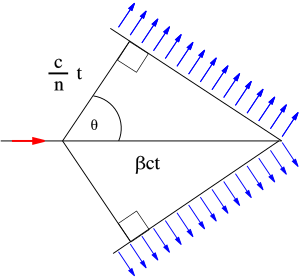 Image of an ideal Cherenkov radiation 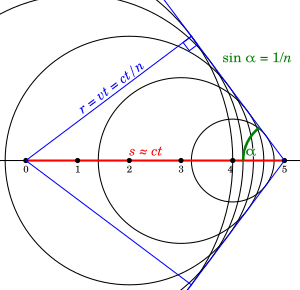 Image of an ideal Cherenkov radiation

Emission angle with respect to the first image

In the first image, a charged particle (red) moves at a speed of

In this medium, the velocity of light is (n is the refractive index)

So, the distance passed by the particle in t time is

And the distance passed by the light is

So, the emission angle is (using trigonometry)

We can also derive the emission angle from the second image too.

All content from Kiddle encyclopedia articles (including the article images and facts) can be freely used under Attribution-ShareAlike license, unless stated otherwise. Cite this article:
Čerenkov radiation Facts for Kids. Kiddle Encyclopedia.