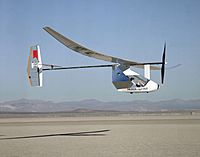 Designing a successful human-powered aircraft is difficult because a very large power to weight ratio must be achieved. This has been the reason why many of these aircraft use advanced composite materials in their construction.

All content from Kiddle encyclopedia articles (including the article images and facts) can be freely used under Attribution-ShareAlike license, unless stated otherwise. Cite this article:
Human powered aircraft Facts for Kids. Kiddle Encyclopedia.