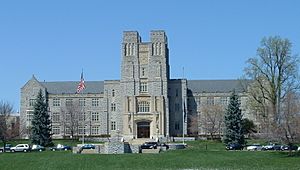 Virginia Polytechnic Institute and State University (or Virginia Tech) is a public land-grant university in Blacksburg, Virginia. The campus was first opened in 1872 as a farming and mechanical college and covers 2,600 acres. It is also one of only a few public universities in the United States to have a corps of cadets.

The Virginia Tech massacre, which happened on the 16th of April 2007, was a tragedy in the history of the University. A student of the university named Cho Seung-Hui killed 32 people before killing himself. This became the worst school-related massacre in United States history.

All content from Kiddle encyclopedia articles (including the article images and facts) can be freely used under Attribution-ShareAlike license, unless stated otherwise. Cite this article:
Virginia Polytechnic Institute and State University Facts for Kids. Kiddle Encyclopedia.