Riva San Vitale is a municipality in the canton of Ticino in Switzerland, located in the district of Mendrisio. 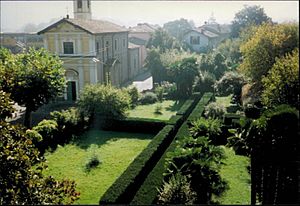 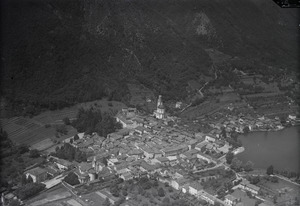 Riva San Vitale is first mentioned in 774 as Primo Sobenno. In 1115 it was mentioned as Ripa Sancti Vitalis.

The area around Riva San Vitale has probably been settled since the Neolithic. Due to the number of Roman era finds, it appears that there was a significant Roman settlement. A stele from some time before the 3rd century AD mentions that it was made for the inhabitants of vicus subinates. In 1115, the Benedictine abbey of S. Abbondio in Como owned property in Riva San Vitale. During the ten-year war between Como and Milan (1118–27) its port was an important base for the Comasker ships. Riva San Vitale was mentioned in the Charter of Como from 1335 as a burgus. In the Late Middle Ages, it lost its leading position in trade to Capolago, but still enjoyed far-reaching privileges and tax exemption. In the 15th century it was a market town for a short time.

The Parish Church of St. Vitale is first mentioned in 962-966. However, the church likely dates back to the Christianization of the southern foothills of the Alps. It was rebuilt in the late Baroque style in 1756-59 and renovated in 1993-95. The Baptistery of San Giovanni is built on the foundations of a Roman building and is from the early Christian era (c. 500 AD). It was renovated in 1919-26 and again in 1953-55 and is the oldest fully preserved churches in Switzerland. The church of S. Croce was endowed by the Della Croce family and was built in 1582-91. It is one of the most important religious buildings of the late Renaissance in Switzerland.

Agriculture, fisheries and brick works were once the main sources of income. In 1869 a silk weaving plant opened in Segoma, which employed about 100 workers in 1889. In the second half of the 20th century, Riva San Vitale saw an industrial boom that was accompanied by an increase in population. In 2000, approximately three-quarters of workers in the municipality were commuters, especially going to Lugano, Mendrisio and Chiasso. In 2005, the manufacturing sector provided 45% and the services sector 52% of all jobs. The Collegio Baragiola building was used as a secondary school from 1855 until 1925. In 1926, the Istituto Canisio, a special school for the disabled, opened in the building.

The Pieve of Riva San Vitale

Riva San Vitale was one of the oldest centers of the diocese of Como, to which it belonged until 1884/88. From here, Christianity spread into the Ticino. Together with the Pieves of Balerna and Uggiate (Como) in the 12th century, the parish formed a consortium. A canon priest is first mentioned in 1190, when Lafrancus de Mellano (died 1254) is called to that position. The number of resident and non-resident canons, is difficult to determine. In 1190 and 1321 two are mentioned. In 1786, Pope Pius VI dissolved the college of canons.

In 1170 it was part of the county of Seprio, and in the 13th century it was under the city of Como. At the beginning of the 15th century it formed, together with the Pieves of Agno, Balerna and Capriasca, the Lugano Valley Community. In 1517, under Swiss Confederation rule, it became part of the bailiwick of Lugano. The Pieve of Riva San Vitale was represented both at the General Conference of the valley (which had power over financial and tax matters as well the salt supply), and in the Landschaftsrat, the valley's administrative body. 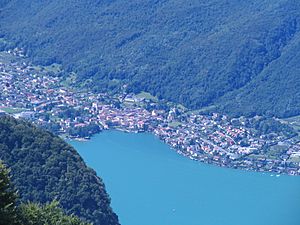 Of the built up area, industrial buildings made up 2.3% of the total area while housing and buildings made up 9.7% and transportation infrastructure made up 1.7%. Out of the forested land, 71.2% of the total land area is heavily forested and 2.0% is covered with orchards or small clusters of trees. Of the agricultural land, 5.9% is used for growing crops, while 4.0% is used for orchards or vine crops and 9.7% is used for alpine pastures. Of the water in the municipality, 0.7% is in lakes and 0.7% is in rivers and streams.

The municipality is located in the Mendrisio district, on the southern end of Lake Lugano and at the foot of Monte San Giorgio. It consists of the village of Riva San Vitale and the hamlet of Poiana.

All content from Kiddle encyclopedia articles (including the article images and facts) can be freely used under Attribution-ShareAlike license, unless stated otherwise. Cite this article:
Riva San Vitale Facts for Kids. Kiddle Encyclopedia.