Bissone is a municipality in the district of Lugano, in the canton of Ticino in Switzerland.

Bissone is first mentioned in 735 and again in 854 as Blixuni. In German it was known as Byssen, though that name is no longer used.

In the 8th Century it was home to a Lombard garrison and supported the fortresses in Campione d'Italia, Arogno and Brusino Arsizio. Starting in the 9th Century, the monastery of S. Ambrogio in Milan owned property in Bissone. The parish church of St. Carpoforo, became partly independent in 1474 from the mother church at Riva San Vitale. It became fully independent in 1622, but retained a relationship with the monastery of San Pietro in Ciel d'Oro in Pavia. The Oratory of St. Rocco was built around 1630.

During the Middle Ages, at the site of today's Casa Tencalla, there was a castle. The castle is first mentioned in 1054. On the mountain side surrounded by fortified walls, were the entrance gates to the village. Bissone was the center of the Ghibellines' resistance during the dispute between Milan and Como (1118–27). Following the French invasion in 1798 and the end of the Old Swiss Confederacy, it became a stronghold of supporters of the Cisalpine Republic. However, on 3 March 1798 it was taken over by Pro-Swiss forces from Lugano.

Bissone was the birthplace of the architect Francesco Borromini and home of numerous construction and architecture dynasties such as the Maderno, Gaggini, Tencalla and Garovaglio families. The local economy always relied primarily on fishing and the fish trade. Under the Old Swiss Confederacy, Bissone, Morcote and Melide had a monopoly on selling fish in Lugano. Another source of income was providing ferries across the lake. During the 14th to 17th Centuries a number of large houses with impressive arcades were built for the local merchants. Later, emigration together with wine, olive and hemp cultivation became the major sources of income. With the construction of the Melide causeway, carrying the road (1847) and railway (1874) from Melide, Bissone lost its traditional trade income. The highway was built in 1966, and separated the old village from the newer housing developments. Since 1950 the economic structure is dominated by the services sector and commuters to Lugano. Bissone is part of the tourist region on Lake Lugano. 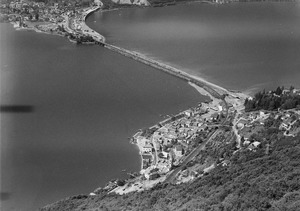 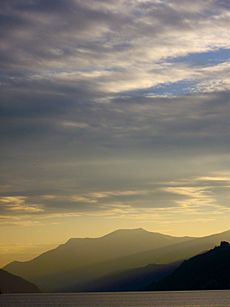 Sunset over Lake Lugano, from Bissone

Of the built up area, housing and buildings made up 12.1% and transportation infrastructure made up 7.7%. while parks, green belts and sports fields made up 1.1%. Out of the forested land, 79.7% of the total land area is heavily forested and 1.6% is covered with orchards or small clusters of trees. Of the agricultural land, 0.1% is used for growing crops and 12.1% is used for alpine pastures.

The municipality is located in the Lugano district on the eastern end of the Melide causeway. It is located on the shore of Lake Lugano, in the southernmost tip of Switzerland.

The blazon of the municipal coat of arms is Argent two serpents erect regardant azure.

The historical population is given in the following table: 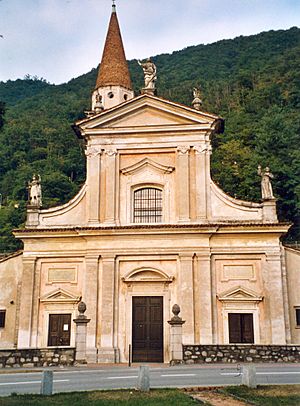 The Parish Church of S. Carpoforo is listed as a Swiss heritage site of national significance. The entire village of Bissone is listed in the Inventory of Swiss Heritage Sites

In 2000[update], there were 202 workers who commuted into the municipality and 277 workers who commuted away. The municipality is a net exporter of workers, with about 1.4 workers leaving the municipality for every one entering. About 22.8% of the workforce coming into Bissone are coming from outside Switzerland, while 7.6% of the locals commute out of Switzerland for work. Of the working population, 8.6% used public transportation to get to work, and 69.5% used a private car. As of 2009[update], there were 3 hotels in Bissone with a total of 146 rooms and 260 beds.

Bissone is located at the eastern end of the Melide causeway, which carries the Gotthard railway, the A2 motorway and a local road across Lake Lugano, providing the only domestic land connection between the southern section of Ticino and the rest of Switzerland. To the north, a local road connects to the Italian enclave of Campione d'Italia, whilst to the south the motorway and railway pass through tunnels (the San Nicolao Tunnel and the Maroggia Tunnel respectively) and the local road passes along the lake side.

There is no railway station in Bissone, but Melide station is located just across the causeway. A motorway junction is partly located in Bissone and partly in Melide.

The entire Swiss population is generally well educated. In Bissone about 76.3% of the population (between age 25-64) have completed either non-mandatory upper secondary education or additional higher education (either university or a Fachhochschule).

In Bissone there were a total of 79 students (as of 2009[update]). The Ticino education system provides up to three years of non-mandatory kindergarten and in Bissone there were 14 children in kindergarten. The primary school program lasts for five years and includes both a standard school and a special school. In the municipality, 25 students attended the standard primary schools and 1 student attended the special school. In the lower secondary school system, students either attend a two-year middle school followed by a two-year pre-apprenticeship or they attend a four-year program to prepare for higher education. There were 16 students in the two-year middle school, while 13 students were in the four-year advanced program.

The upper secondary school includes several options, but at the end of the upper secondary program, a student will be prepared to enter a trade or to continue on to a university or college. In Ticino, vocational students may either attend school while working on their internship or apprenticeship (which takes three or four years) or may attend school followed by an internship or apprenticeship (which takes one year as a full-time student or one and a half to two years as a part-time student). There were 4 vocational students who were attending school full-time and 6 who attend part-time.

As of 2000[update], there were 1 students in Bissone who came from another municipality, while 65 residents attended schools outside the municipality.

All content from Kiddle encyclopedia articles (including the article images and facts) can be freely used under Attribution-ShareAlike license, unless stated otherwise. Cite this article:
Bissone Facts for Kids. Kiddle Encyclopedia.