Kids Encyclopedia Facts
(Redirected from Canton of Ticino)
This article is about the Swiss canton Ticino. For the river Ticino, see Ticino (river).

Canton Ticino or Ticino ([]; French and German: Tessin [] and []) is the southernmost canton of Switzerland. The written language is Italian in almost the entire canton (except the Walser municipality of Bosco Gurin, where it is German). It surrounds the Italian exclave of Campione d'Italia. Together with areas of the canton of Graubünden it makes up the so-called Svizzera Italiana (Italian Switzerland). Lombard dialects (Ticinese) are still spoken, especially in the valleys, but they have no official status. It is named after the Ticino river. 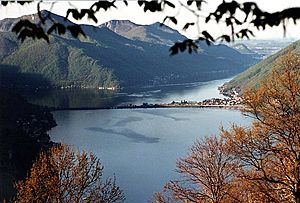 The canton of Ticino is located in the south of Switzerland. It is almost entirely surrounded by Italy which lies to its east, west and south. To the north lie the cantons of Valais and Uri, to the northeast the canton of Graubünden.

Its area is 2,812 km², of which about three quarters are considered productive. Forests cover about a third of the area, but also the lakes Maggiore and Lugano make up a considerable part of the total area. These lakes are known with the above listed names, but are officially named Lake Verbano and Lake Ceresio.

The canton is split geographically in two parts by the Monte Ceneri pass. The northern, more mountainous part, called Sopraceneri, is formed by the two major Swiss valleys around the lake Maggiore: Ticino Valley and Maggia Valley. The southern part, called Sottoceneri, is the region around the Lake Lugano.

The River Ticino is the largest river in the canton. It drains most of the canton, flowing from the northwest through the Bedretto Valley and the Leventina valley to enter Lake Maggiore near Locarno. Its main tributaries are the Brenno in the Blenio Valley and the Moesa in the Mesolcina Valley in Graubünden. The lands of the canton are shaped by the river, which in its mid portion forms a wide valley, commonly known as the Riviera.

The western lands of the canton, however, are drained by the Maggia River. The Verzasca Valley is located between the Ticino river and the Maggia river. There is also a smaller area that drains directly into the Lake Lugano. Most of the land is considered within the Alps, but a small area is part of the plain of the River Po which drains the north of Italy.

In ancient times the area of what is today Ticino was settled by the Lepontii, a Celtic tribe. Later, probably around the rule of Augustus, it became part of the Roman Empire. After the fall of the Western Empire, was ruled by the Ostrogoths, the Lombards and the Franks. Around 1100 CE it was the centre of struggle between the free communes of Milan and Como: in the 14th century it was definitively acquired by the Visconti, Dukes of Milan. In the 15th century the Swiss Confederates conquered the valleys south of the Alps in three separate conquests.

The Canton of Uri conquered the Leventina Valley in 1440. Between 1403 and 1422 some of these lands were already annexed by forces from Uri, but subsequently lost. In a second conquest Uri, Schwyz and Nidwalden gained the town of Bellinzona and the Riviera in 1500. Some of the land and the town Bellinzona itself were previously annexed by Uri in 1419 but lost again in 1422. The third conquest was fought by troops from the entire Confederation (at that time constituted by 12 cantons). In 1512 Locarno, the Maggia Valley, Lugano and Mendrisio were annexed. Subsequently, the upper valley of the Ticino River, from the St. Gotthard to the town of Biasca (Leventina Valley) was part of Canton Uri. The remaining territory (Baliaggi Ultramontani, Ennetbergische Vogteien, the Bailiwicks Beyond the Mountains) was administered by the Twelve Cantons.

The lands of the canton of Ticino are the last lands to be conquered by the Swiss Confederation. (After the battle of Marignano in 1515 the king of France Francis I defeated the Confederates, and they gave up any further conquests.) In February 1798 an attempt of annexation by the Cisalpine Republic was repelled by a volunteer militia in Lugano. Between 1798 and 1803, during the Helvetic Republic, the districts of Bellinzona and Lugano were separate cantons, but in 1803 the two were unified to form the canton of Ticino that joined the Swiss Confederation as a full member in the same year. During the Napoleonic Wars, many Ticinese (as was the case for other Swiss) served in Swiss military units allied with the French.

Until 1878 the three largest cities, Bellinzona, Lugano and Locarno, alternated as capital of the canton. In 1878, however, Bellinzona became the only and permanent capital.

The cantonal parliament is the Grand Council (Italian: Gran Consiglio), with 90 members and the government (Consiglio di Stato) has 5 members (Consiglieri di Stato). In the both councils the members are elected with the proportional electoral system. The canton sends two deputies to the Swiss Council of States (upper house), and eight deputies to the National Council (lower house). It's regional capitol is Bellinzona.

The main agricultural production is wine, mostly merlot, a type of red wine. It is followed by horticulture, milk and cheese production.

The hilly slopes of the canton are used extensively for the production of hydroelectricity. The electricity produced is used at home and sold for export. There is cattle breeding in the northern areas. The production of wine is important in the canton and exported to mainly other areas in Switzerland. The vineyards are mostly concentrated in the southern half of the canton where the climate is warmer. Other agricultural produce includes corn (maize), potatoes, tobacco and vegetables.

The weather in the canton is often inverse to that north of the Alps. This, and a warmer climate in general, attracts many tourists from other Swiss cantons. The lakes together with the sunshine are considered attractive. Tourism is the single most important economic factor in the canton.

There is also light industry, mostly concentrated around the three largest towns of Lugano, Locarno and Bellinzona.

The canton is well connected to the rest of Switzerland. There are tunnels underneath the Gotthard massive, both for rail and road. The canton of Grisons (Graubünden) is connected with a direct coach link, whereas the canton of Valais is connected by rail through a tunnel at the Simplon Pass. There are good rail links to Milan and Rome in Italy as well as Germany via Basel and Zürich.

Because of the tourist trade there are a number of small railways in scenic areas in the mountains. Winter sports is important, despite being less developed.

There are two major centres of education and research located in the canton of Ticino. The University of Italian speaking Switzerland (USI, Università della Svizzera Italiana) is the only Swiss university teaching in Italian. The University of Applied Sciences of Italian speaking Switzerland (SUPSI, Scuola Universitaria Professionale della Svizzera Italiana) on the other hand is a professional training college focused on a practical method of teaching in the areas of applied art, economy, social work, technology and production science.

The official language, and the one used for most written communication, is Italian. In oral communication Western Lombard (Ticinese) varieties, although receding in favour of Italian (especially in the cities of Lugano, Ascona and Locarno and among the younger generations), are still well preserved. These are further subdivided into local variations, with the northern valleys speaking a dialect more closely aligned with Romansch, Switzerland's fourth official language. There is a certain amount of popular literature (poems, comedies, etc.) in Ticinese, and the national radio and televisions trasmit regularly program in Ticinese (mainly comedies).

The population is mostly Roman Catholic (75%) or Protestant (7%). About 2% each are Orthodox or Muslim. 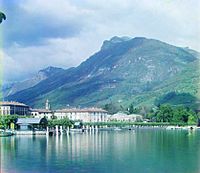 An old 1905-1910 photograph of Lugano by Prokudin-Gorskii

The Canton of Ticino is divided into 8 districts (distretti) and 38 circles (circoli): 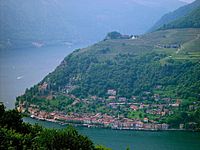 There are 195 municipalities in the canton (as of February 2006). These municipalities (comuni) are grouped in 38 circoli (circles or sub-districts) which are in turn grouped into districts (distretti). Since late 1990 there is an ongoing project of group some municipalities together (as they are small).

All content from Kiddle encyclopedia articles (including the article images and facts) can be freely used under Attribution-ShareAlike license, unless stated otherwise. Cite this article:
Ticino Facts for Kids. Kiddle Encyclopedia.