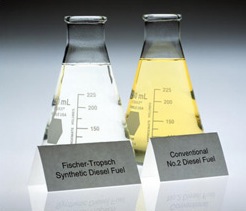 Side-by-side comparison of FT synthetic fuel and conventional fuel. The synthetic fuel is clear as water because of a near-absence of sulfur and aromatics.

A synthetic fuel (or synfuel) is a fuel in liquid or gas form that can be manufactured from coal or in the form of oil extracted from shale or tar sands. It can also be made from non-food crops. Tar sands are a combination of sand and a thick oil called bitumen. This, along with oil shale, which is a layer of rock riddled with hydrocarbons in the form of kerogen, can be heated with steam to remove the crude oil in the two substances. Like oil, it must be refined before being put to use.

All content from Kiddle encyclopedia articles (including the article images and facts) can be freely used under Attribution-ShareAlike license, unless stated otherwise. Cite this article:
Synthetic fuel Facts for Kids. Kiddle Encyclopedia.