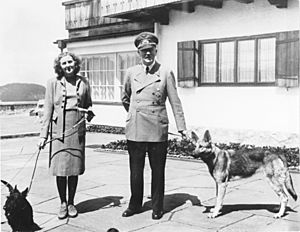 Eva Anna Paula Braun (6 February 1912 – 30 April 1945) was the longtime girlfriend of Adolf Hitler. She met him in Munich when she was 17 years old. They married the day before they committed suicide (killed themselves), Braun killed herself by using cyanide. Hitler used cyanide and at the same time shot himself. When she was married, she was known as Eva Anna Paula Hitler. She was born in Munich, Germany and died in Berlin, Germany at the age of 33. Her body was burned as well as Adolf Hitler.

All content from Kiddle encyclopedia articles (including the article images and facts) can be freely used under Attribution-ShareAlike license, unless stated otherwise. Cite this article:
Eva Braun Facts for Kids. Kiddle Encyclopedia.