The Little Mermaid is a statue in Copenhagen, Denmark. Based on the 1837 fairy tale of the same name by Danish author Hans Christian Andersen, the small and unimposing statue is a Copenhagen icon and has been a major tourist attraction since its unveiling in 1913. The statue is 1.25 metres (4.1 ft) tall. Sculptor Edvard Eriksen created the bronze statue.

Mermaid is among iconic statues that symbolize cities; others include: the statue of Pania of the Reef in Napier, Manneken Pis in Brussels, the Statue of Liberty in New York and Christ the Redeemer in Rio de Janeiro. 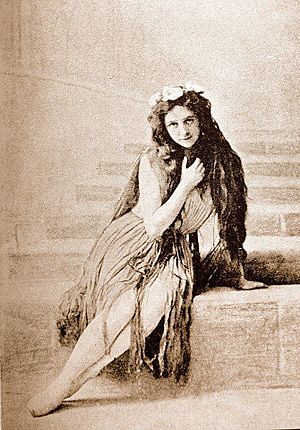 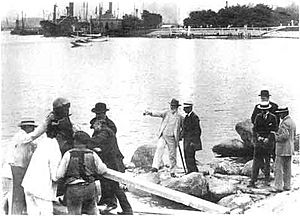 The statue was commissioned in 1909 by Carl Jacobsen, son of the founder of Carlsberg, who had been fascinated by a ballet about the fairytale in Copenhagen's Royal Theatre and asked the ballerina, Ellen Price, to model for the statue. The sculptor Edvard Eriksen created the bronze statue, which was unveiled on August 23, 1913.

The Copenhagen City Council arranged to move the statue to Shanghai at the Danish Pavilion for the duration of the Expo 2010 (May to October), the first time it had been moved officially from its perch since it was installed almost a century earlier. While the statue was away in Shanghai an authorised copy was displayed on a rock in the lake in Copenhagen's nearby Tivoli Gardens. Copenhagen officials have considered moving the statue several meters out into the harbour to discourage vandalism and to prevent tourists from climbing onto it, but as of May 2014 the statue remains on dry land at the water side at Langelinie.

All content from Kiddle encyclopedia articles (including the article images and facts) can be freely used under Attribution-ShareAlike license, unless stated otherwise. Cite this article:
The Little Mermaid (statue) Facts for Kids. Kiddle Encyclopedia.