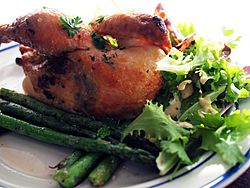 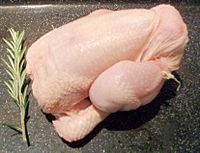 A Cornish game hen ready for the oven

Cornish game hen (also Rock Cornish game hen) is the USDA-approved name for variety of broiler chicken, produced from a cross between the Cornish and White Plymouth Rock chicken breeds, that is served young and immature, weighing no more than two pounds (900 g) ready to cook.

Despite the name, the Cornish game hen is not a game bird and can be either male or female. Bred to develop a large breast over a short period of time, the fowl weighs roughly 2.5 pounds (1.1 kilograms) when slaughtered at four to six weeks of age and typically commands a higher price per pound than mature chicken.

The Saturday Evening Post credited Alphonsine "Therese" and Jacques Makowsky of Connecticut with developing the small fowl in the mid-1950s. The couple crossbred Cornish game cocks with other varieties of chicken and game bird, including the White Plymouth Rock hen and the Malayan fighting cock, to produce a succulent bird suitable for a single serving. The musician and comedian Victor Borge was an early investor in and promoter of the concept, leveraging his personal popularity to transform the dish from an exotic menu item into a common household meal.

All content from Kiddle encyclopedia articles (including the article images and facts) can be freely used under Attribution-ShareAlike license, unless stated otherwise. Cite this article:
Cornish game hen Facts for Kids. Kiddle Encyclopedia.