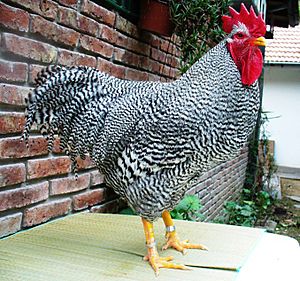 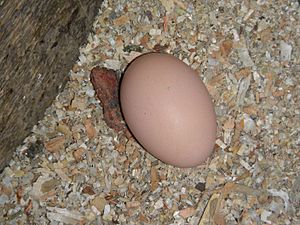 The Plymouth Rock is an American breed of domestic chicken. It was first seen in Massachusetts in the nineteenth century, and for much of the early twentieth century was the most popular chicken breed in the United States. It is a dual-purpose breed, raised both for its meat and for its brown eggs. It is resistant to cold, easy to manage, and a good sitter.

The Plymouth Rock was first shown in Boston in 1849, but was then not seen for another twenty years. In 1869, in Worcester, Massachusetts, one D.A. Upham cross-bred some Black Java hens with a cock with barred plumage and a single comb; he selectively bred for barred plumage and clean (featherless) legs. His birds were shown in Worcester in 1869; the modern Plymouth Rock is thought to derive from them. Other people have been associated with the development of the Plymouth Rock, as have other chicken breeds including the Brahma, the Cochin (both white and buff), the Dominique, and the White-faced Black Spanish.

The Plymouth Rock was added to the Standard of Excellence of the American Poultry Association in 1874. The barred plumage pattern was the original one; other colors were later added.

Because of its many good qualities – tasty meat, good egg production, resistance to cold, early feathering, easy management, good sitting – the Plymouth Rock became the most widespread chicken breed in the United States until the time of World War II. With the advent of industrial chicken farming, it was much used in the development of broiler hybrids, but began to fall in popularity as a domestic fowl.

The Plymouth Rock has a single comb with five points; the comb, wattles and ear-lobes are bright red. The legs are yellow and unfeathered. The beak is yellow or horn-colored. The back is long and broad, and the breast fairly deep.

In the United States, seven color varieties of the Plymouth Rock are recognized: barred, blue, buff, Columbian, partridge, silver-penciled and white. Ten plumage varieties are listed by the Entente Européenne d’Aviculture et de Cuniculture, of which five – barred, black, buff, Columbian and white – are recognized by the Poultry Club of Great Britain. In Australia, the barred variant is split into two separate colors, dark barred and light barred.

The Plymouth Rock is a dual-purpose breed, and is kept both for its meat and for its large brown eggs, of which it lays about 200 per year.

All content from Kiddle encyclopedia articles (including the article images and facts) can be freely used under Attribution-ShareAlike license, unless stated otherwise. Cite this article:
Plymouth Rock chicken Facts for Kids. Kiddle Encyclopedia.